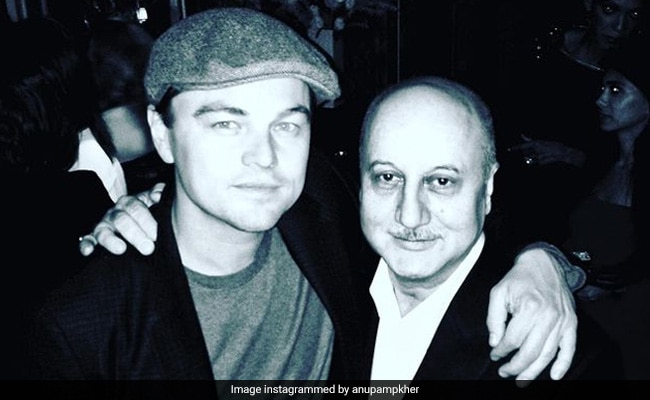 Bollywood veteran Anupam Kher, who often shares throwbacks with Hollywood A-listers, posted a picture with Leonardo DiCaprio and shared an interesting incident from their meeting. In his caption, Anupam Kher revealed that the picture happens to be from an event in Los Angeles. He added that the picture was taken a few years back and he described the Titanic actor as "kind and affectionate." He wrote in his post, "I met Leonardo DiCaprio at an event in Los Angeles few years back. I introduced myself. I said, "I am an Indian actor." He said, "I know!" I asked, "How?" And then he just gave me a warm hug. He was kind and affectionate."

Anupam Kher added in his caption, "The best thing about being an actor is that you meet wonderful people from all over the world and bond with them easily. Actors are a tribe in themselves. #Actors #Acting #Bonding #MagicOfCinema #Films."

The actor has starred in many international projects, including Oscar-winning Silver Linings Playbook, Bend It Like Beckham, Bride And Prejudice, Lust, Caution, Breakaway, and A Family Man, to name a few.

Anupam Kher has been a part of films like Saaransh, Ram Lakhan, Lamhe, Darr, Dilwale Dulhaniya Le Jayenge, Maine Gandhi Ko Nahin Mara, Baby and Special 26, among many others. He was last seen in the 2019 crime-thriller One Day: Justice Delivered, in which he co-starred with Esha Gupta, Kumud Mishra and Anusmriti Sarkar.