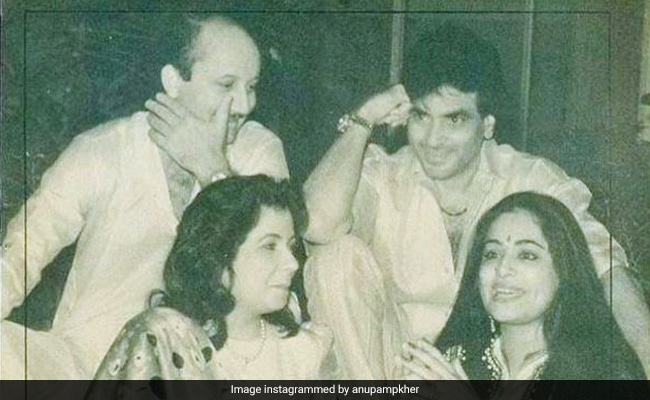 Actor Anupam Kher went down memory lane and recalled the "great times" that he and his wife, actress Kirron Kher, spent with their friends Jeetendra and Shobha Kapoor. Recalling the old times, Anupam Kher shared a vintage throwback picture on Instagram. The picture features Anupam Kher, Kirron Kher, Jeetendra and Shobha Kapoor. In the picture, all of them can be seen smiling as they seem to be in a light hearted discussion. In the caption of the post, Anupam Kher shared that he found the picture inside a book and "immediately went into a flashback of the great times." Sharing the picture on Instagram, he wrote: "Life moves on, but memories don't. I found this pic of #Jeetu ji, #Shobha ji, #Kirron and I in a book. I immediately went into a flashback of the great times we all had together." He added: "It was fun. Laughter, stories and carefree atmosphere. And then we all grew up. I really miss us. #Nostalgia #Friends #Pic #Life #GoodOldDays #Actors #Jitendra."

The star-studded vintage pic received scores of comments on Instagram. Most of the fans dropped heart emojis in the comments section of Anupam Kher's post.

Anupam Kher recently spent some time in his hometown Shimla with his mother Dulari. He has been constantly sharing updates in the form of pictures and videos from Shimla on Instagram.

Take a look at Anupam Kher's posts from Shimla here:

In terms of work, Anupam Kher was last seen in the 2019 film The Accidental Prine Minister. He will soon be seen in The Kashmir Files and The Last Show.