How Cool Are These Pics From Malaika Arora And Arjun Kapoor's New York Holiday? 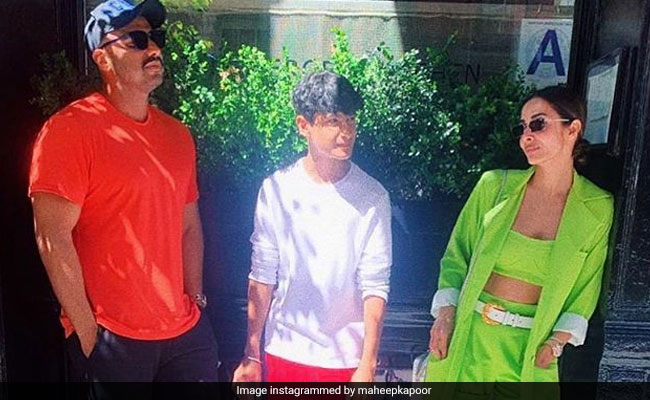 Arjun Kapoor and Malaika Arora are on a vacation in New York. (Image courtesy: maheepkapoor)

Arjun Kapoor joined his uncle Sanjay Kapoor and family on their extended vacation in the US last week with his girlfriend Malaika Arora. Sanjay's wife Maheep Kapoor's latest Instagram update includes a picture of Malaika and Arjun with Jahaan (son of Maheep and Sanjay Kapoor), in which the trio posed in the colours of the Indian flag. "Jai hind," Maheep captioned the post while Malaika jestingly commented on Maheep's candid photography skills. On his Instagram page, Sanjay Kapoor added a couple of more pictures from the outing. Malaika was at her goofiest best in one of the photos.

Malaika, who wore looked lovely in green, also posted a solo picture of herself sipping a cool drink on a sunny day. "Basking in neon ....#mycolouroftheseason #nyc."

Here are highlights from Arjun and Malaika's US trip with Sanjay and Maheep Kapoor:

Arjun Kapoor and Malaika Arora were spotted leaving India a day before Arjun Kapoor's 34th birthday, which the couple celebrated in New York. On his birthday, Malaika Arora sort of made it Instagram official as she a captioned a picture of them as: "Happy birthday my crazy, insanely funny and amazing Arjun Kapoor... love n happiness always."

Arjun Kapoor and Malaika Arora were initially reluctant about speaking about their relationship in media interviews. However, things changed after Malaika accompanied Arjun to several film screenings recently. After they were photographed together on several occasions, Arjun told Filmfare: "We've come out because we feel the media has given us dignity. There's a certain understanding the media has... they've been respectful, kind, honest and decent about it. That is why I felt comfortable."

Arjun Kapoor took time off from his Panipat schedule for this holiday. Arjun, who was last seen in India's Most Wanted, is also awaiting the release of Sandeep Aur Pinky Faraar.