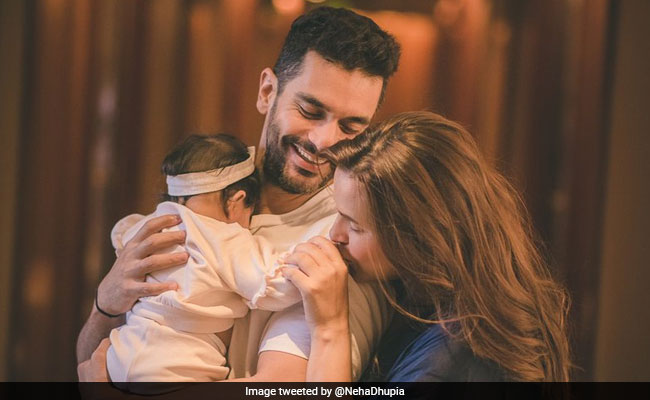 Neha Dhupia recently shared an adorable family picture on her Instagram as Angad Bedi and her daughter turned six months old. The picture features the trio - actor Angad Bedi, their daughter Mehr and Neha. In the picture, Angad can be seen carrying their daughter Mehr in his arms and Neha kissing Mehr's little hand standing from behind. She shared the photo and captioned it: "Shape of my heart... our baby girl #6monthstoday." Soon after she shared the picture, her celebrity friends such as Dia Mizra, Sophie Choudry and Anaita Adajania commented on her photo. Dia Mirza showered several heart emojis on the picture, whereas Sophie Choudry comments saying, "So beautiful." Mehr is the first child of Angad Bedia and Neha Dhupia.

Shape of my heart.... our baby girl #6monthstoday

Neha Dhupia and Angad Bedi got married in the month of May last year. They had a close knit wedding ceremony in a gurudrwara in Delhi. Few months after the wedding the couple had announced about the pregnancy on social media in a very adorable approach. Sharing the news, Neha's post was very straight forward, whereas Angad Bedi posted in a quirky way. Neha had written "Here's to new beginning" and Angad wrote: "Ha! Turns out this rumor is true." The couple welcomed their daughter Mehr on November 2018.

To the most special #throwback of my life ... thank you for showering my life with all your love ... #happyanniversary my everything @angadbedi @ashishjparmar @raghavramaiah

On the work front, Neha Dhupia is currently hosting the show BFFs with Vogue and Angad Bedi will be featuring in the film The Zoya Factor along with Sonam Kapoor and Dulquer Salmaan.