Rani Mukerji's Hichki has collected over 20 crore in 6 days 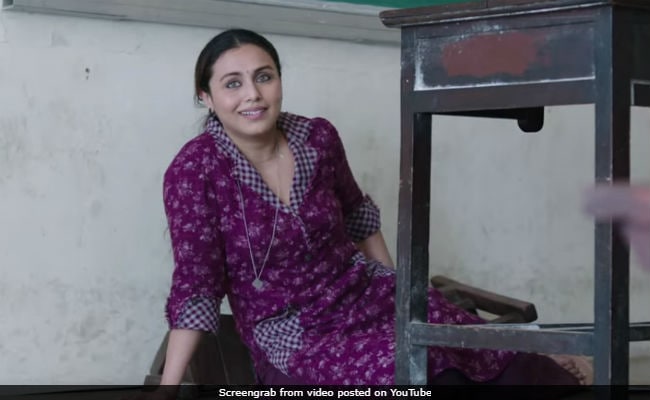 New Delhi: Actress Rani Mukerji, who returned to the silver screen with Hichki, told mid-day that actresses making a comeback after marriage or kids should not be looked on as a 'dead commodity.' She told mid-day, "I think the definition of success with this film, for me, is the fact that it has broken the perception that married actress, or actresses who are making their comeback after motherhood do not work and are a dead commodity. After this, I hope more women come out and work in movies." Hichki was released on March 23.

Before Hichki, Rani Mukerji was last seen in 2014 film Mardaani. She took a break spanning four years after the release of Mardaani. During this period, she got married to YRF scion Aditya Chopra on April 21, 2014, in a private ceremony held in Italy. Rani's brother-in-law Uday Chopra revealed the news of her marriage on Twitter, "We welcome Rani Chopra to the family. Lots of love to the newlyweds."

Rani Mukerji in her official statement post marriage said she missed the presence of late filmmaker Yash Chopra on her wedding day. "It was a beautiful wedding in the Italian countryside with just a few of our close family and friends with us. The one person I missed terribly was Yash uncle, but I know he was there with us in spirit and his love and blessings will always be with Adi and me," an excerpt from her statement read.

In 2015, Rani Mukerji and Aditya Chopra welcomed daughter Adira. Taking up work after Adira's birth had concerned Rani, just like any regular mother. Speaking of which she told news agency PTI, "I had this anxiety about leaving my daughter at home because it was going to be a new environment for her. She is not going to see me for a few hours, which she is used to. It is a dilemma that every working mother goes through where you face this anxiety. The child will soon get used to it. I am sure Adira will understand that both her parents leave home for work. It will be normal and it will be something that she will be proud of."

Promoted
Listen to the latest songs, only on JioSaavn.com
In Hichki, Rani Mukerji plays a teacher, who suffers from Tourette syndrome all her life. The film tracks her struggle through personal and professional life. Talking about the film's performance, she told mid-day, "The film has not only entertained but also made a difference in people's lives. Thanks to social media, I am able to gauge the reactions from the aam junta who have loved the film."