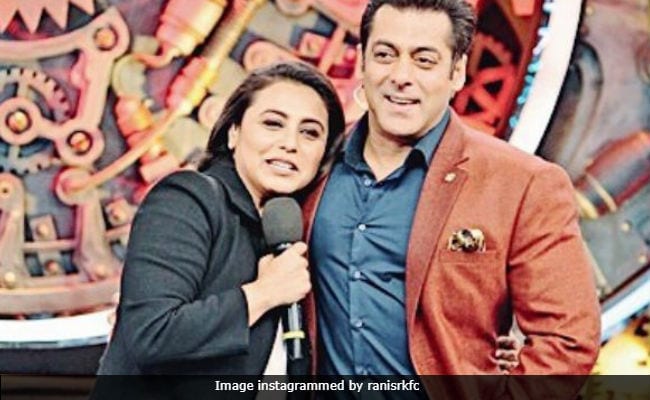 New Delhi: Rani Mukerji has an advice for her friend and colleague, Salman Khan, which is ditch marriage, have babies, reports mid-day. Rani Mukerji, star of upcoming film Hichki was on the sets of Salman Khan-hosted Bigg Boss 11 when she gave him the advised him to become a father. A source told mid-day: "Rani told Salman that he should avoid getting married, and simply become a father. She went on to add that Salman's kid could be a companion for her daughter, Adira." Rani Mukerji is married to Yash Raj Films boss Aditya Chopra and they are parents to two-year-old Adira.

.@BeingSalmanKhan and Rani Mukherjee indulge in some fun banter on the #BB11 stage. Don't forget to catch them tonight at 9 PM on #WeekendKaVaar. pic.twitter.com/4u9Q64qytw

Rani Mukherji also said that Salman's baby will be "as good-looking as him." The source added: "When Salman questioned what would happen if the child resembled a not-so-good-looking mother, the duo simply burst out laughing," reports mid-day.

In Hichki, Rani Mukerji plays an aspiring teacher with Tourette syndrome. She is given an oddball section (lower income group students in an elite school) to teach and how she works with the group and overcomes her own shortcomings forms the film's plot. Hichki is directed by Siddharth P Malhotra for producer Maneesh Sharma (director of Band Baaja Baaraat and Fan). The film is presented by Yash Raj Film.