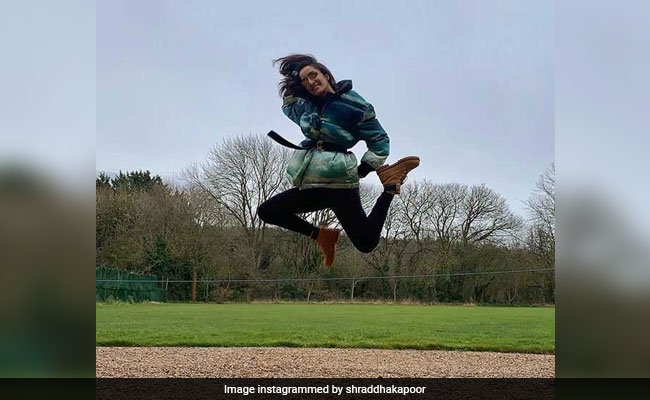 Shraddha Kapoor is working really hard for her role in her forthcoming film Street Dancer and we got a glimpse of her preparatory sessions through the posts shared by the actress on her Instagram stories. In one of the pictures, Shraddha can be seen doing a headstand. She also shared a video from the film's practice sessions. The video was originally shared by Varun Dhawan on his Instagram profile and it was later poached by Shraddha. In the video, Shraddha could be seen dressed in a white top and a pair of track pants as she smoothly does a headstand while Varun teases her. Varun tagged Shraddha in the post and he captioned it: "Gotta love her."

The video of Shraddha doing a head stand has been curated by several fan clubs dedicated to the actress on Instagram. Check out the video here:

@varundvn story ft. @shraddhakapoor "gotta love her" Omg that caption he gave... is just love . . VD: Shraddha I'm going ha. Shra: Bye! VD: Say bye at least properly yaar! Shra: Bye! VD: At least look at me yaar! So much arrogance. This is what happens when you sign a film in South with a big superstar! Shra: I'm gonna kill you when I come down! VD: Treat us so badly! . . Their conversations and the way he pulls her leg and irritates her... it's too cute for words! I'm loving the fact that he wants a proper bye from her before he leaves.. although that was said in a fun way Just loving this cuties more! And I'm so proud of Shra for the hardwork she is putting in and I think Vd is too, his caption "gotta love her" conveys the same #varshra #varundhawan #shraddhakapoor #streetdancer3d #rulebreakers #3iscoming #cutecouple #bestcouple #couplegoals #friendship #bestfriends #bestfriendgoals #forever #love #soulmates #fun #crazy #dancers #virtahira #varshraaregoals #madeforeachother

Varun Dhawan and Shraddha share a great rapport. On Varun's birthday, the Saaho actress shared a super cute picture of herself along with Varun and accompanied it along with an extensive post. "Happy birthday fellow Street Dancer! You're an amazing friend, co-actor and most importantly, a really nice person. Your good vibes are too contagious and you make everyone very proud. Have the best birthday," wrote Shraddha Kapoor.

Happy birthday fellow Street Dancer! @varundvn You're an amazing friend, co actor and most importantly, a really nice person. Your good vibes are too contagious and you make everyone very proud. Have the best birthday!!! Love you

On the work front, Shraddha Kapoor was last seen in Batti Gul Meter Chalu. Her line-up of films includes Saaho and Chhichhore.

Varun Dhawan's last release was Kalank. He will next be seen in the Coolie No 1 remake co-starring Sara Ali Khan.