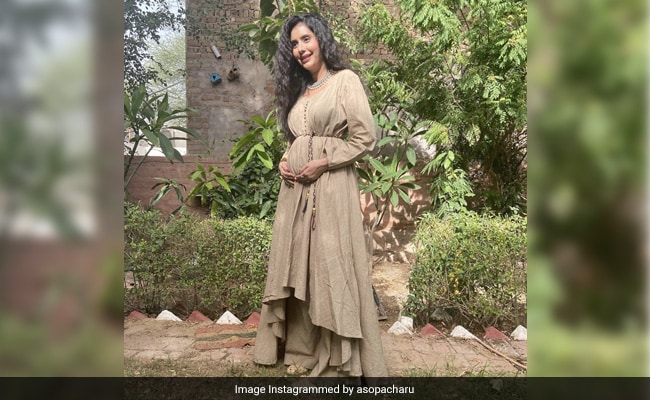 TV actress Charu Asopa, who is expecting her first child with husband and Sushmita Sen's brother Rajeev Sen, shared the big news on her Instagram profile on Saturday. She posted a set of pictures, in which we got a glimpse of her baby bump. Charu Asopa, sharing the happy pictures on Instagram, wrote in her caption: "Grateful, thankful, blessed." The actress' post got a whole lot of love from her friends from the TV industry. Rajeev Sen's niece and Sushmita Sen's daughter Renee Sen also dropped a comment. She wrote: "Mamisa, Can't wait to pamper our little one."

Meanwhile, Rajeev Sen announced Charu Asopa's pregnancy by posting a mushy picture with his wife and he wrote: "Happiness is on the way. #weare3."

Charu Asopa married Sushmita Sen's brother Rajeev in a civil ceremony in June, 2019 after dating for four months. They later hosted a grand ceremony in Goa, which was attended by Sushmita Sen, her daughters, and boyfriend Rohman Shawl.

Last year, Charu Asopa and Rajeev Sen trended big time after they unfollowed each other on social media and removed pictures of each other from their respective Instagram accounts. Rajeev Sen also alleged in an interview with the Times of India that someone close to Charu is "brainwashing her." Responding to which, Charu Asopa said in a separate interview, "No one is brainwashing me. I am mature enough to make my own decisions - something that I have always done."

Meanwhile, Renee Sen made her acting debut with the short film Suttabaazi, for which she received massive praise. Renee, in an interview with NDTV earlier this year, said, "I am aware of how privileged I am. I know there are lakhs of people coming to Mumbai to become actors. I don't want to boast but being her daughter has been the biggest privilege. So, the biggest disservice I will do if I am dishonest to my work."