Here's How Nimrat Kaur Is Prepping For International Yoga Day

"Let's make the next 3 weeks personally fun and something for us all to look forward to," wrote Nimrat Kaur 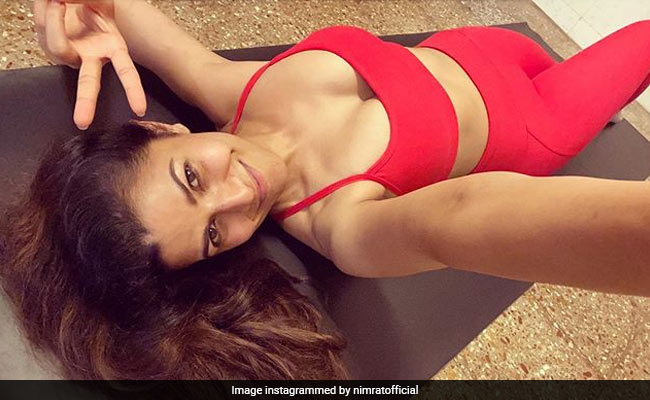 Nothing to see here... just Nimrat Kaur in a "matfie" (selfie clicked on a yoga mat) but her caption is a must-read one for fitness freaks out there. Nimrat Kaur, in a Monday motivation post on Monday, revealed she's started prepping for International Yoga Day, celebrated on June 21. With her post, Nimrat encouraged her Instafam to have fun with yoga sessions as a form of fitness regime in the days leading up to International Yoga Day: "Let's make the next 3 weeks personally fun and something for us all to look forward to! Practise, post, tag, give up something dear to you that you've been wanting to and journal away your yoga stories. I'll be reading, noting, filing them all... don't forget to tag me!"

Nimrat Kaur also added that she and her personal trainer have planned a surprise for her Instafam for June 21. "I'm also personally taking on a 21-day challenge which I'll reveal that day," she added. So, here's how Nimrat is keeping herself busy with yoga and "matfies".

Let's make the next 3 weeks personally fun and something for us all to look forward to!!! Practise, post, tag, give up something dear to you that you've been wanting to...and journal away your yoga stories...I'll be reading, noting, filing them all...don't forget to tag me!! June 21st it is! #Matfie #YogaSaga #InternationalYogaDayRunUp #BeginAgain #UnlockHearts

Nimrat Kaur often trends for her Instagram posts. During one of her trips to the grocery store, Nimrat gave us a glimpse of what will be considered as the "old abnormal" in the future:

"Looked up, going down and stepped off it nice and smooth." What I intend to say when all this becomes our 'old abnormal'! #BringItOn #CovidProQuo #GroceryStroll #BareShoulderEssentials #CoronaChronicles #Kaurantined

Nimrat, who celebrated a quarantined Eid during the lockdown, posted this to spread some festive cheer on Instagram: "Let nothing around you, the absence or presence of anything, dampen your spirits today."

Let nothing around you, the absence or presence of anything, dampen your spirits today. Everything and everyone you miss sorely shall be with you very very soon! Praying for all your wishes and dreams to come true. May you indulge in tonnes of love, some great food and sheer khurma all day long Please be home and be safe. Eid bauhaut bauhaut mubaarak #EidMubarak #EidUlFitr #SheerKhurmaForLife #StayHome #Kaurantined

Earlier, Nimrat featured in headlines for chancing upon this mural of Irrfan Khan on a Mumbai building. "Such an ominous yet celebratory confluence of life and art," she wrote, remembering her The Lunchbox co-star days after his death.

Chanced upon this arresting mural in Ranwar Village on an errand run today. Incidentally only a few houses down the one where Saajan Fernandes's house was located in The Lunchbox. Such an ominous yet celebratory confluence of life and art. My heart felt compliments to the artist @bollywoodartproject and a million thoughts and loving prayers for this immortal soul. All that came to the mind was, who knew...#IrrfanForever

Nimrat Kaur was last seen in 2016 movie Airlift, starring Akshay Kumar. She currently features on popular US television show Homeland. Nimrat Kaur is best known for her role as a young and neglected housewife in critically acclaimed film The Lunchbox, in which she co-starred with Irrfan Khan.