Nimrat Kaur Chanced Upon This Mural Of Irrfan Khan. There's A Lunchbox Twist

"A few houses down the one where Saajan Fernandes' house is located in The Lunchbox," Nimrat wrote about the location of the artwork 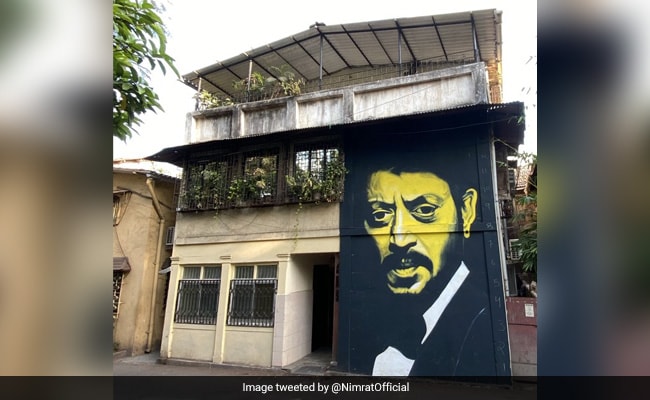 Actress Nimrat Kaur had the most bittersweet "Lunchbox" moment while running an errand in Bandra West, Mumbai. In a post shared on social media, the 38-year-old actress posted a picture of a mural she spotted on the wall of a house in the urban hamlet of Ranwar Village; the artwork - a portrait of Irrfan Khan, Nimrat's co-star in director Ritesh Batra's acclaimed The Lunchbox. Irrfan Khan died last month after battling cancer - he was 53. Even more heart-wrenching is the fact that the house Nimrat spotted the mural on is just a few away from the house that belonged to Saajan Fernandes, Irrfan's character in The Lunchbox.

An overwhelmed Nimrat tweeted this on Wednesday night: "Chanced upon this arresting wall artwork in Ranwar Village on an errand run today. Incidentally a few houses down the one where Saajan Fernandes' house is located in The Lunchbox. Such an ominous yet celebratory confluence of life and art. Who'd have thought... #IrrfanForever."

Chanced upon this arresting wall artwork in Ranwar Village on an errand run today. Incidentally a few houses down the one where Saajan Fernandes's house is located in The Lunchbox. Such an ominous yet celebratory confluence of life and art. Who'd have thought... #IrrfanForeverpic.twitter.com/ahi79KtNH3

Nimrat Kaur later found out that the wall painting is courtesy artists Ranjit Dahiya and Vikas Bansal and part of their Bollywood Art Project, started in 2012 in Mumbai as a tribute to Hindi cinema. Details of how Irrfan Khan's mural came to life have been shared on Bollywood Art Project's Instagram, which also mentions the exact address of the house. Take a look:

The Lunchbox starred Irrfan Khan as Saajan Fernandes, an ageing and lonely widower who accidentally receives at office the 'dabba' or lunchbox intended for the husband of Ila, played by Nimrat Kaur. Ila, a young and neglected housewife, is also lonely. The pair develop an unlikely romance via an exchange of notes sent with the lunchbox.

Irrfan Khan, who was diagnosed with cancer in 2018, died in Mumbai on April 29. Nimrat Kaur paid a tribute to her The Lunchbox co-star with this post: "The endless possibility of a human life."

The endless possibility of a human life. #Irrfan

Speaking to news agency PTI on the day of Irrfan Khan's death, Nimrat described it as a "personal loss": "It is a personal loss for everyone and anyone, who loved his movies, loved him as an audience or who interviewed him or had met him. It is a moment in time which is defined by the reaction that is coming in. That's when you know how much an actor is loved and adored and will be missed."

"He was deeply rooted as a human being and was a keen observer of life and nothing missed eyes, he had a razor sharp wit. He was a perfect vessel as an actor where he would come and with him being the vehicle, the story goes forward, which is why it was an Irrfan khan performance. He got so much gravity and life even by being in a frame, he didn't have to say anything, his eyes were... You learn so much just by watching him," she added.