Irrfan Khan's 10 Definitive Films: A Qissa Of His Brilliant Legacy 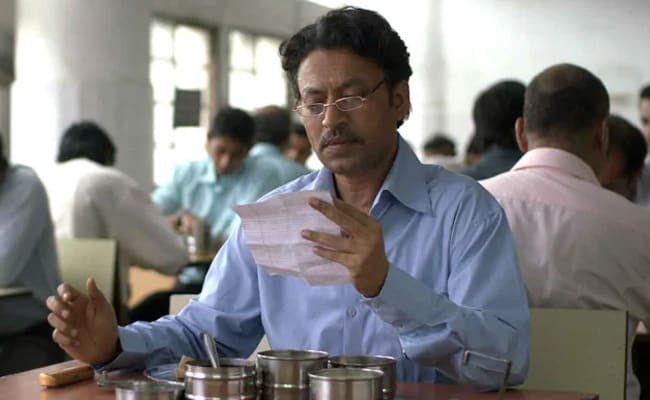 Irrfan Khan in a still from The Lunchbox

Irrfan Khan, "first face that comes to mind when we think actor," wrote Kartik Aaryan in his tribute and we completely agree. Irrfan Khan's tragic death on Wednesday cut short a luminous career; he leaves behind an impressive legacy studded with critically acclaimed gems. Irrfan Khan's journey as an actor took off with Mira Nair's Oscar-nominated 1988 film Salaam Bombay! and spanned over three decades - he was last seen in Angrezi Medium, a film for which he took a break from his treatment in London and briefly returned to India. There's no summing up Irrfan Khan's accomplishments in a list but the best way to remember him is through his incredible work. Here are our top 10 from his forever films. Like Shah Rukh Khan said: "Will miss you as much as cherish the fact that you were part of our lives."

Directed by Vishal Bhardwaj, 2003 film Maqbool was Irrfan Khan's earliest, and perhaps most overwhelming, success at home after his breakout in British production The Warrior. The film was Mr Bhardwaj's adaptation of Macbeth into an Indian setting, the first of his Shakespearean trilogy. The film's cast also included Tabu, Pankaj Kapur, Om Puri and Naseeruddin Shah. Irrfan was cast as Miyan Maqbool, the film's equivalent of Macbeth. The movie opened the floodgates for Irrfan Khan, both at home and in Hollywood.

After his debut movie, Irrfan Khan worked with Mira Nair again - and also with Tabu - in The Namesake, the film based on Jhumpa Lahiri's novel of the same name. Irrfan co-starred with Hollywood actor Kal Penn in the English film, convincingly playing a Bengali man who leaves Kolkata and settles in New York. Irrfan Khan's death in the movie is the turning point of the story.

This 2013 gem took the festival circuit by storm. Reviewing The Lunchbox for NDTV, film critic Saibal Chatterjee singled out Irrfan's chemistry with his co-stars and said: "Besides the amazing quality of its craft, what props up The Lunchbox is a troika of splendid performances by Irrfan Khan, Nimrat Kaur and Nawazuddin Siddiqui... The three central performances are terrific, with Irrfan and Nawazuddin striking up a duet that is absolutely spectacular... The Lunchbox holds riches that aren't likely to be forgotten in a hurry."

Shoojit Sircar's 2015 offering navigated the fine line between depth and entertainment. The offbeat pairing of Irrfan Khan and Deepika Padukone with Amitabh Bachchan playing the third-wheel of sorts was the secret ingredient of the storyline. "A characteristically confident Irrfan is, as always, pitch perfect," Saibal Chatterjee wrote in his review and added: "A warm, charming and bittersweet family drama, Piku turns the genre completely on its head."

Irrfan Khan's millennium began with British filmmaker Asif Kapadia's 2001 venture The Warrior, which turned out to be his breakout role, three years before Irrfan was cast in Maqbool. The film won several awards including a BAFTA. Filmed in his native Rajasthan, Irrfan played the titular role in The Warrior - a warrior, who attempts to give up the sword.

Over 10 years later in 2012, there Irrfan Khan was as Paan Singh Tomar, playing the titular Indian athlete, rebel and soldier. Irrfan, who was a one-man-army in the film, won the Best Actor National Award for the Tigmanshu Dhulia-directed biographical drama. The film won Best Feature Film.

Who can forget Talvar, the haunting drama about the 2008 double murder case in Noida, in which Irrfan played the chief investigating officer? "Irrfan Khan is the mainstay of Talvar. As long as he is on it, it is difficult to take one's eye off the screen," read NDTV's review.

This unconventional jewel from Irrfan Khan's film treasury released in 2013. The Punjabi-language Partition-era drama is about a displaced Sikh family with Irrfan Khan headlining the cast. "Playing a man teetering on the edge of insanity, Khan informs the character with nuanced qualities that make him an object of both dread and empathy," read NDTV's review.

"Irrfan Khan, as always, is first rate: he packs his performance with warmth, humour and just the right dash of emotion" - this was NDTV's summing up of Irrfan Khan's performance in its review. In Life Of Pi, directed by celebrated Taiwanese filmmaker Ang Lee, Irrfan played the adult version of the protagonist Pi, who narrates the entire story, which plays out in flashback.

The last of Vishal Bhardwaj's Shakespeare trilogy, 2013's Haider set Hamlet in the politically-turbulent Kashmir and is a perfect example of how Irrfan Khan's impact on screen was independent of the length of his role. As Roohdaar, he played a companion of Haider's or Hamlet's father from his time in a detention camp - Roohdaar serves as the equivalent of the ghost of Hamlet's murdered father. The titular Haider is played by Shahid Kapoor; his mother is played by Tabu.

There has never been anybody like Irrfan Khan. Never will be.