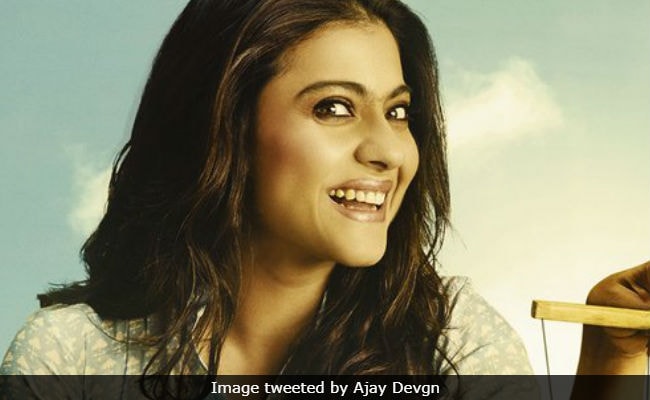 Minutes after announcing his new film on football coach Syed Abdul Rahim, actor filmmaker Ajay Devgn shared a new poster of his wife's film Helicopter Eela, which he produces. The poster is the complete version of the teaser poster shared by the makers earlier this month. "Helicopter Eela is reinventing parenting techniques for 2018," Ajay Devgn captioned the post. The poster shows Kajol looking absolutely thrilled as she takes the role of master puppeteer in the life of Riddhi Sen, who plays her onscreen son in the film. Kajol also shared the poster on her social media pages and captioned it: "Holding on to my baby be like." The film is the adaptation of Gujarati play Beta, Kaagdo, written by Anand Gandhi.

Check out the poster of Helicopter Eela:

And this was the teaser poster, shared by the filmmakers on July 4:

She's here, there, everywhere!!! #HelicopterEela is coming on 14th September.@KajolAtUN@riddhisen896@pradeepsrkar@HelicopterEela@ADFfilms@PenMovies@jayantilalgadapic.twitter.com/DAkQklVzRw

Helicopter Eela is directed by Pradeep Sarkar (Mardaani and Parineeta) and it also stars Tota Roy Chowdhury and Neha Dhupia in pivotal roles. Riddhi Sen, who features on the poster with Kajol, has starred in Parched, also produced by Ajay Devgn and he won the Best Actor National Film Award for his role in Bengali film Nagarkirtan.

Kajol has been very selective about her projects in the last few years. Before Helicopter Eela, her last Bollywood film was 2015's Dilwale opposite Shah Rukh Khan. In between she made just one film - VIP 2 (Tamil), co-starring Dhanush. Kajol also dubbed for the character of Helen Parr aka Elastigirl in the Hindi version of Incredibles 2.

Helicopter Eela is expected to release on September 14, after which Kajol will be seen in a cameo role in SRK's Zero releasing in December.