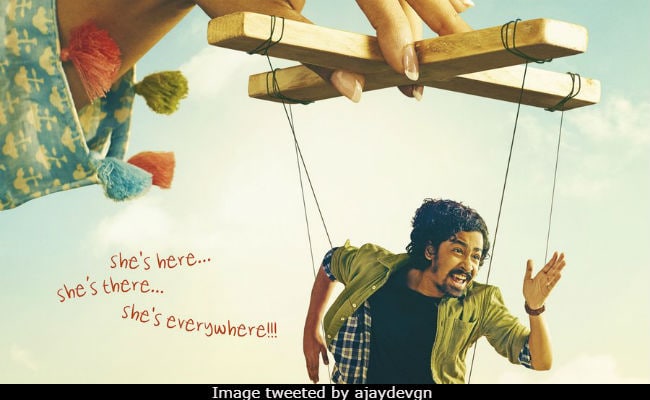 Ajay Devgn shared a brand new poster of Kajol's next film Helicopter Eela on Thursday. "She's here, there, everywhere!" wrote Ajay but that's not just his words, that's how Kajol's onscreen character has been described in the poster. The new poster stars 19-year-old National Award-winning actor Riddhi Sen and if you're hoping to see Kajol, all we can tell you is, you can spot the actress pulling the strings (quite literally) in it. Kajol, who also tweeted the new poster of Helicopter Eela, described the protagonist as "Yahaan, wahaan, sab jagah... aa rahi hai Helicopter Eela." Kajol's Helicepter Eela is scheduled to release in September.

She's here, there, everywhere!!! #HelicopterEela is coming on 14th September.@KajolAtUN@riddhisen896@pradeepsrkar@HelicopterEela@ADFfilms@PenMovies@jayantilalgadapic.twitter.com/DAkQklVzRw

Directed by Pradeep Sarkar, Helicopter Eela is the onscreen adaptation of a Gujarati play written by Anand Gandhi - The Ship Of Theseus. Riddhi Sen, who won his first National Award for Nagar Kirtan, plays the onscreen son of Kajol's character in the movie, which is said to explore the different shades of a mother's relationship with her son. Eela will mark Kajol's first film after she made a comeback to Tamil movies with last year's VIP 2, in which she co-starred with Dhanush.

Promoted
Listen to the latest songs, only on JioSaavn.com
In between, Kajol also had a role to play in the recently released Hindi version of Incredibles 2 - she voiced the character of Helen Parr aka Elastigirl. Kajol, who has not yet announced new projects yet, revealed in an interview to IANS that she would not mind working in Hollywood. "I would love to do a Hollywood film. There is no particular genre in mind, and it depends whether the script appeals to me or not. I would ask the same questions that I would ask for a Hindi film before picking the project," she said.

Kajol's Helicopter Eela is all set to hit screens on September 14.