Swara Bhasker said, "I actually was the one looking out for the child's welfare" 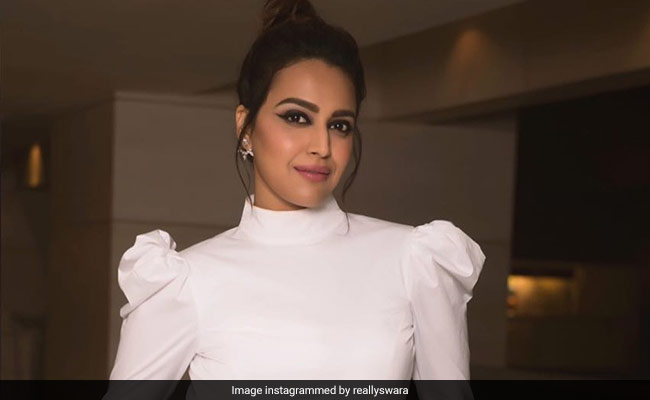 Actress Swara Bhasker has addressed criticism after she used cuss words to describe a child artiste saying that her words, though 'ill-advised,' were used 'jokingly and self-deprecatingly' and that she has 'never abused children or any co-actor,' reports news agency IANS. Ms Bhasker, 31, was shredded on social media last week after she appeared on comedy talk show 'Son Of Abish.' In the course of the show, Swara Bhasker used swear words, which we will not reproduce here, while relating how outraged she felt when a four-year-old co-star called her 'aunty' while filming an advertisement. #AuntySwara trended on Twitter after the show went online, with severe rebukes for the actress.

Swara Bhasker has said her comment was "obviously a joke" and points out that she was on a comic show. "I was on a comedy show, narrating a funny incident about my first experience shooting in Mumbai. In that partly exaggerated and satirical narration, where I was using a comedic, adult and self-deprecating tone, I used certain swear words," Ms Bhasker said, reports IANS.

Asked if the issue blew out of proportion, Swara Bhasker said, "Of course, it did. The whole controversy was clearly targeted and constructed. I'm not trying to justify swearing. Those were undoubtedly an ill-advised choice of words, but they were not seriously used. It was said jokingly and self-deprecatingly. Comics do it all the time without anyone blinking an eyelid," reports IANS.

"I have never abused children nor any co-actor and I have always treated children with the care, affection and the responsible conduct they deserve. I actually like children. The quip that 'children are evil' was obviously a joke," Swara Bhasker told IANS.

The Veere Di Wedding actress also said that the context her comment was made in should be noted. "If you actually watch the show, you would realise that I actually was the one looking out for the child's welfare - trying to make sure he gets a bathroom break, which other people on the set seemingly didn't care about," Swara Bhasker told IANS.

After the video from the show surfaced on social media, hashtags #Swara_aunty and #SwaraAunty trended on Twitter for about two days. The actress was called out by several angry users. According to a news report, an NGO - Legal Rights Protection Forum - filed a complaint with the National Commission for Protection of Child Rights, and demanded action against Swara Bhasker.

Swara Bhasker is best-known for her performances in film such as the Tanu Weds Manu series, Nil Battey Sannata andRaanjhanaa, among others. She has also featured in several web-series including It's Not That Simple, Rasbhari and Flesh.

Swara Bhasker made her debut with the 2009 film Madholal Keep Walking. However, her breakout film was Aanand L Rai's Tanu Weds Manu, in which she played the role of Kangana Ranaut's friend Payal.