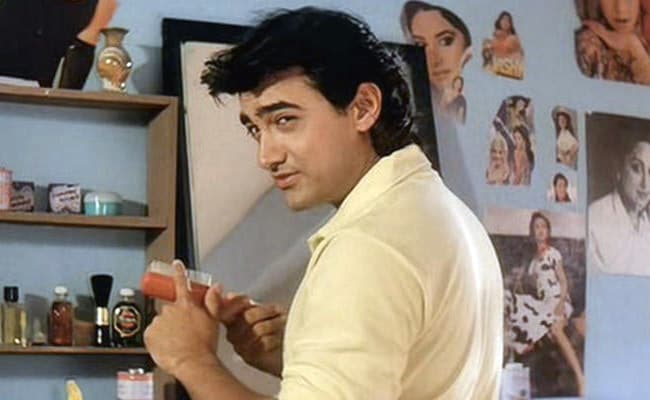 A still from Aamir Khan's film

There's no one like Aamir Khan. He has proved himself as a versatile actor every time he has appeared on the big screen. Be it playing the role of hard-working and determined village man Bhuvan in Lagaan or thug Munna in Rangeela, he has aced every character with ease and made them alive onscreen. The actor is all set to once again blow our mind with his amazing acting skill in Laal Singh Chaddha, which is a Hindi remake of Tom Hanks' iconic drama-romance Forrest Gump. And, as Aamir Khan turns a year older today, we bring you a list of the top ten roles that the 57-year-old actor has played and made popular.

The film, directed by Rajkumar Santoshi, is still considered one of the cult comedies of Bollywood. Aamir Khan starred as a slacker named Amar who competes with another idler named Prem (played by Salman Khan) to gain the trust and love of a rich girl.

To see Aamir Khan nail the role of a tapori in Rangeela was surely a delight. The Ram Gopal Varma directorial also featured Urmila Matondkar and Jackie Shroff. Aamir's portrayal of Munna, a thug who fell in love with a budding actress named Mili (Urmila), was as real as it can get. His struggle to help Mili become an actress and accept her life with another man (Jackie Shroff) melted the heart of the audience.

In this John Matthew Matthan directorial, Aamir Khan played a police officer who is keen on wiping out terrorism from his country. His character, Ajay, was a medical student who was not inclined towards patriotic acts, however, after his brother was killed and his father was severely injured following a terrorist attack, he decided to join the force and end the game of terrorists.

The Oscar-nominated film will always be listed as one of Aamir Khan's top ten performances. The actor portrayed the role of a villager named Bhuvan, who along with his fellow mates, decides to challenge the British Army officers to a cricket game to avoid paying high taxes imposed on them. The film, which won eight National Film Awards, was set in the pre-independence era.

Aamir Khan played the role of a flirty, witty and carefree guy, Aakash, in this film set on friendship and love. His unique style, especially his tiny goatee, in the film influenced youngsters when it was released in 2001. The movie was directed by Farhan Akhtar.

Aamir Khan's physical transformation for this film left us all in awe. At the age of 43, he set the big screen on fire with his chiseled, ripped body. He featured as a businessman named Sanjay Singhania who suffers from short-term memory following a tragic incident.

In this Rajkumar Hirani-directed film, Aamir Khan made the character of Rancho alive onscreen. The film, based on Chetan Bhagat's novel Five Point Someone, starred R Madhavan and Sharman Joshi as Rancho's college friends. Years after graduating, Farhan (Madhavan) and Raju (Sharman) set on a journey to look for their friend, whose existence seems elusive to them.

Aamir Khan played the role of an alein in this film. The actor even went completely naked to show the quirky side of the alien. Aamir's funny gimmicks and dialect made his character a favourite among his fans. PK was directed by Rajkumar Hirani.

Aamir Khan played the role of Mahavir Phogat, the father of wrestlers Geeta and Babita Phogat, in this biographical sports drama. Aamir as a father determined to train his daughters for Commonwealth Games while facing societal pressure left us speechless. The film, helmed by Nitesh Tiwari, also starred Fatima Sana Shaikh and Sanya Malhotra.