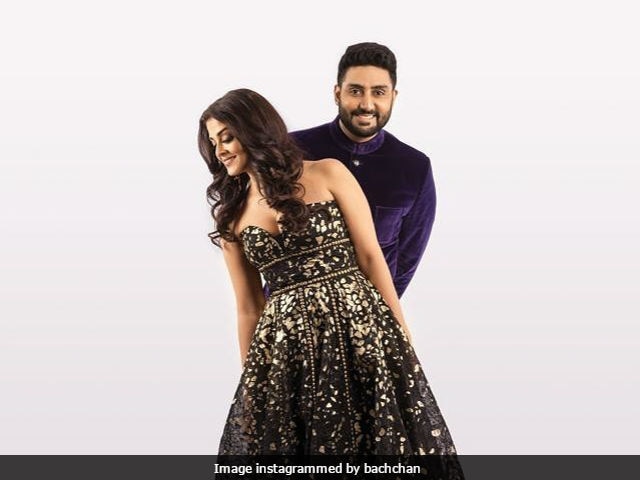 New Delhi: Celebrity couple Aishwarya Rai Bachchan and Abhishek Bachchan are celebrating their 10th wedding anniversary today. However, the festivities will be muted as Aishwarya's father, Krishnaraj Rai, died in Mumbai's Lilavati Hospital last month. Aishwarya and Abhishek, one of Bollywood's most high profile couples, are co-stars from many films. They married on April 20, 2007 in a grand ceremony held at the Bachchans' Juhu residence, Pratiksha. The couple have a 5-year-old daughter named Aaradhya. Last year, 41-year-old Abhishek posted an adorable picture of himself and Aishwarya on their anniversary. He wrote: "9 years of togetherness, love and hugs!" On their 10th wedding anniversary, we are giving you a glimpse of their journey together with a few pictures below.

Here is the picture posted by Abhishek Bachchan on their last anniversary:

9 years of togetherness, love and hugs!

Abhishek Bachchan's world revolves around his wife and daughter and this picture is proof of that:

Life is a journey which is far more enjoyable when your holding hands with the ones you love.

The Mrs. Get awarded by Miss World as their most successful and impactful Miss World. Honoured. She got the award, I got to hold Little A. I got the better deal.

Aishwarya and Abhishek Bachchan have often been spotted enjoying sports like football and cricket. The Dostana actor has posted several pictures on social media:

Well played boyz!!! As always your spirit is indomitable. And namma chennai supporters are the loudest and best fans. Thank you. #chennaiyinFC #CHE

Aishwarya Rai Bachchan and Abhishek Bachchan first starred together in 2000 movie Dhai Akshar Prem Ke, directed by Raj Kanwar. On their eighth anniversary, Abhishek Bachchan shared a picture of their first shoot together on social media. See the picture below:

This is from the 1st ever shoot Aishwarya and I did together. We've come a long way since then. Thank you all so much for such warm wishes on our 8th wedding anniversary. Big love to you all from both of us.

Aishwarya and Abhishek later co-starred in films such as Kuch Naa Kaho, Dhoom 2, Umrao Jaan, Guru and Raavan. The couple have now reportedly been roped in by filmmaker Anurag Kashyap for his next venture, titled Gulab Jamun, according to India Today. Some reports also suggest that their Guru and Raavan director Mani Ratnam might make a third film with the couple.

Aishwarya Rai Bachchan was last seen in 2016 movie Ae Dil Hai Mushkil, co-starring Ranbir Kapoor and Anushka Sharma. She took a five-year break after Aaradhya was born and returned to acting with 2015's Jazbaa. Aishwarya, xxAGE, will likely be spotted at the Cannes Film Festival, where she is a regular, next month.

Promoted
Listen to the latest songs, only on JioSaavn.com
Abhishek Bachchan was last seen in 2016 movie Housefull 3, co-starring Akshay Kumar, Riteish Deshmukh, Jacqueline Fernandez, Nargis Fakhri, and Lisa Haydon. The Players actor is also committed to working with Ronnie Screwvala in his next venture. His other upcoming projects are - Priyadarshan's Bachchan Singh, Prabhu Deva's Lefty and Nishikant Kamat's next film.