Guess Who Visited Neha Dhupia On The Sets Of Roadies 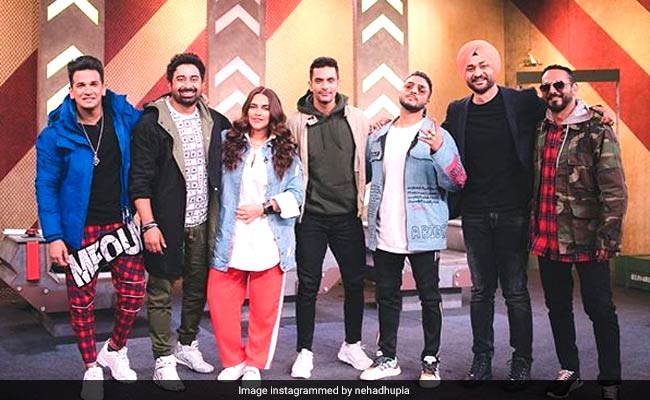 Neha Dhupia, Angad Bedi and others on the sets of Roadies (Image courtesy nehadhupia)

For new mommy Neha Dhupia, 2019 has started off on a busy note. After taking a short break to celebrate the New Year's with her husband Angad Bedi and Mehr, Neha is back and she has kick started shooting for the new season of Roadies Real Heroes. The 38-year-old actress, who was recently in New Delhi for the audition of the reality television series, had a special visitor on the sets. In case you guessed it was Angad Bedi, you are absolutely right. Neha Dhupia shared photos from the sets featuring Rannvijay Singha, Prince Narula, Nikhil Chinapa, Raftaar - the Roadies gang leaders - and Anged Bedi popped up in the post. "Spot the visitor," Neha Dhupia captioned the set of photos.

Neha, who welcomed baby girl Mehr in November last year, resumed working, weeks after she brought her daughter home. In an earlier interview to news agency PTI the new mom had said that going slow at work is not an option but she has not zeroed in on her next film as of now as she wants to be physically compatible for the role. "If I have to mould myself into a certain character, it could be a little while before I could commit myself to it. I don't know physically what the character will expect out of me. I have worked through all shapes and sizes," PTI quoted Neha as saying.

Neha Dhupia is one of the co-judges in Roadies Real Heroes. Last year, she featured in Kajol's Helicopter Eela and Netflix's Lust Stories in the segment directed by Karan Johar.