Group Hug For Aaliyah Kashyap, Alanna Panday And Friends In This Throwback 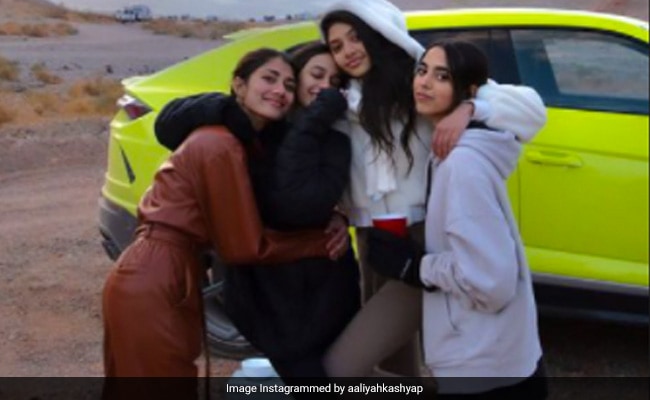 Filmmaker Anurag Kashyap's daughter Aaliyah Kashyap, who is currently in Mumbai, on Thursday, recalled one of her recent get-togethers with her friend, model Alanna Panday. Both Aaliyah and Alanna Panday live in Los Angeles. Recalling her recent meet with Alanna, Aaliyah shared a throwback picture on her Instagram story. The picture features Aaliyah Kashyap, Alanna Panday and their friends, Aryaana G and Srushti Porey. The location where the picture was clicked is not specified, but the view makes it clear that it is a peaceful corner where the girl gang went for a little getaway. The group of four can be seen sharing a hug as they pose for the picture. The background of the picture is formed by a breath-taking view of a river, mountains and a beautiful sky painted by nature. Both Aaliyah and Alanna can be seen wearing comfy hoodies in the picture. Sharing the picture on her Instagram story, Aaliyah just wrote: "Throwback." 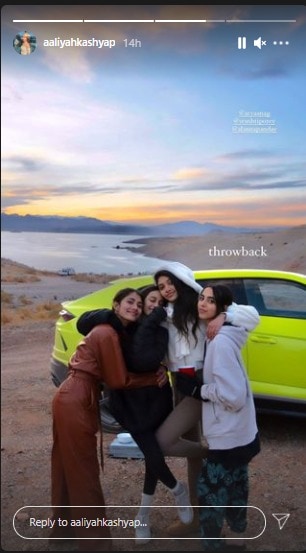 Alanna Panday also re-shared the picture on her Instagram story and added a red heart emoji to it. 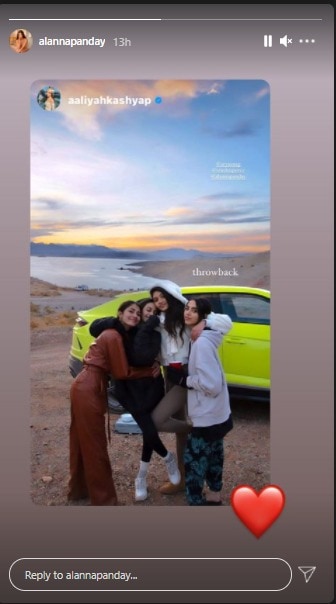 Aaliyah Kashyap studies in Los Angeles and she is also a lifestyle vlogger. Alanna Panday, on the other hand, is a model. Alanna is the daughter of fitness expert Deanne Panday and is the cousin sister of actress Ananya Panday.

As mentioned above, Aaliyah has currently returned to Mumbai, where her parents live. Aaliyah recently gave us a tour of her room in her dad Anurag Kashyap's apartment through one of her vlogs. In the vlog titled "A day in my life in Mumbai," Aaliyah Kashyap took us through her daily routine in Mumbai.

Anurag Kashyap shares Aaliyah with his ex-wife Aarti Bajaj. When Aaliyah is back in Mumbai, she spends time with both her parents.