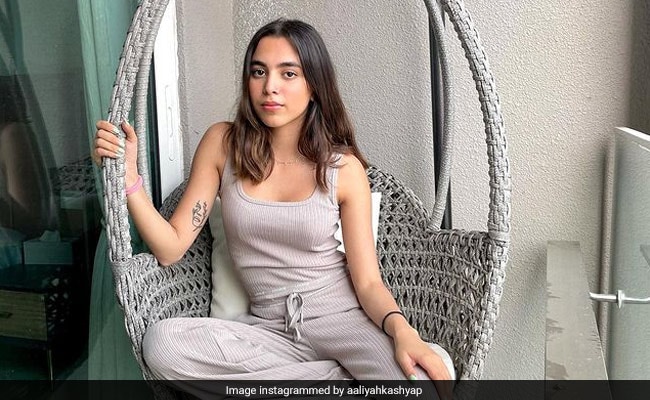 Aaliyah Kashyap in a still from her video (courtesy YouTube)

Aaliyah Kashyap just gave a tour of her room at dad Anurag Kashyap's house and it's pretty. Aliyah, who is a lifestyle vlogger, lives in California - she is Anurag Kashyap's daughter with his former wife Aarti Bajaj. When in Mumbai, Aliyah spends time both at her mom's place and her father's apartment. In her latest vlog, titled "A day in my life in Mumbai," she gives us a tour of her room in Anurag Kashyap's residence. The video logs Aaliya's day-long routine, starting from a therapy session and ending with some pizza and F.R.I.E.N.D.S.

In between, Aaliyah drives to Anurag Kashyap's house. Aaliyah says it's still under renovation and that she's looking forward to the completed room. As she pans the camera, we can see her room is complete with a bed, floor rugs and curtains in shades of pink and grey. Aaliyah appears most excited about the glass closet with lighting.

Aaliyah's room opens into a cozy balcony with a hanging chair, about which she says: "I love my little outside hammock area." She wraps the tour by saying, "This is my room here. Very cute, very nice."