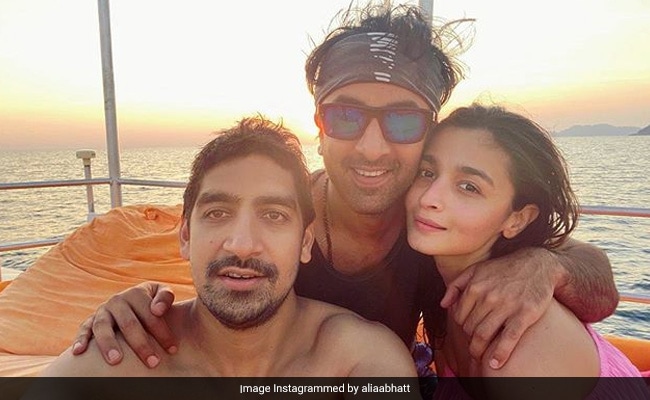 Attention, folks! Alia Bhatt posted a picture perfect selfie along with the usual suspects, or should we say "good boys" (Alia's words) - Ranbir Kapoor and Ayan Mukerji on her Instagram profile and it has our heart. In the picture, Ranbir can be seen smiling with all his heart, while Alia and Ayan can be seen goofily posing for the camera at an undisclosed beach destination. Alia Bhatt and Ranbir Kapoor, who are co-stars in Ayan Mukerji's fantasy trilogy Brahmastra, have reportedly been dating for more than a year. Alia accompanied her post with an equally interesting caption, which read: "Best boys (and good girl)."

Check out the picture first, you can thank us later:

Alia kick started 2020 by sharing a sun-soaked picture of herself on the photograph sharing application and she captioned it: "The light is coming 2020."

Just like this year, Alia and Ranbir Kapoor spent the New Year's together in 2019 as well. Alia had accompanied Ranbir and his family to New York, where Ranbir's father Rishi Kapoor was undergoing cancer treatment.

Rumours about Alia Bhatt and Ranbir Kapoor's romance began after the couple made an appearance together at Sonam Kapoor and Anand Ahuja's wedding reception in 2018. The actors recently featured in a TV commercial together and they will be seen sharing screen space in Ayan Mukerji's trilogy Brahmastra, the first part of which is slated to release next year. The film also stars Amitabh Bachchan, Dimple Kapadia, Mouni Roy and Akkineni Nagarjuna in pivotal roles.