"Good Cop To Bad Cop:" Shefali Shah's Note For Husband Vipul Shah Is Everything - So Is The Pic

"I wouldn't choose anyone else," wrote Shefali Shah 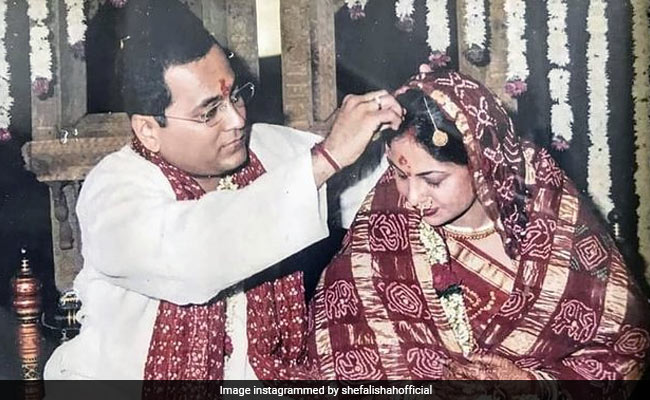 Delhi Crime star Shefali Shah shared a chunk of memories in the form of throwback pictures with her husband and filmmaker Vipul Shah, who celebrates his birthday today. She posted a throwback from their wedding day along with a few other pictures (some old, some relatively recent). She added a super cute caption to the post that read: "Through thick and thin, more hair less hair, past present future, ups and downs, fights and making up, understanding and misunderstanding, weakness to strength, disdain to love, agreements and disagreements, from good cop to bad cop... I wouldn't choose anyone else. Happy Birthday." In the comments section, Maria Goretti wrote: "Lotsa lotsa lotsa love."

Check out the post shared by Shefali Shah here:

In a separate post, the Dil Dhadakne Do actress shared a greyscale solo shot of her husband and she captioned the post: "Love you Mr. HALO-gen(t) #HappyBirthday." She added a few cake and heart emojis. This is the post we are talking about:

Shefali Shah famously starred in Netflix's Delhi Crime, which won the best Drama Series at last year's International Emmys. She starred as DCP Vartika Chaturvedi in the show. The actress is also known for starring in films like 15 Park Avenue, Karthik Calling Karthik, Dil Dhadakne Do and Commando 2 among others.

Vipul Shah has directed films like Aankhen, Namastey London, Action Replayy, London Dreams and Waqt: The Race Against Time, to name a few. His last project as a director was Namaste England. He has also produced several Bollywood projects.