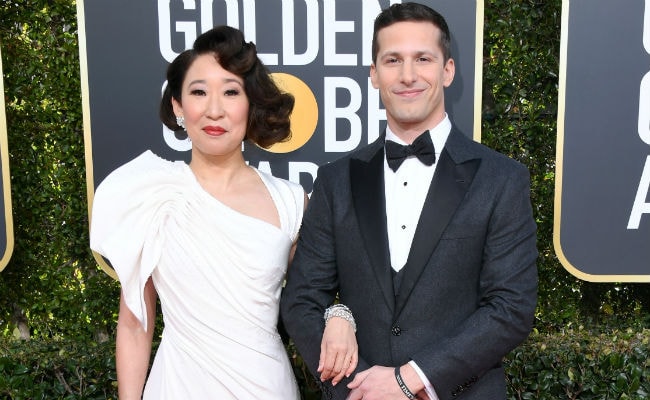 If you think award shows are TOO POLITICAL these days, you were in luck during the Golden Globes on Sunday night. Politics were barely mentioned as co-hosts Andy Samberg and Sandra Oh mostly stuck to making fun of their fellow celebrities and Hollywood - although there was one pointed comment about society.

"It was another huge year for director Ryan Coogler, a fellow . . . Bay Area native," Samberg said of Black Panther director. "You know, if you told me as a kid growing up in the Bay there'd be a movie called Black Panther that starts off in Oakland, this is not what I would have imagined. Ryan, were there, like, a bunch of old members of the actual Black Panther party saying, 'I can't even get an audition?' Just kidding. They were all framed and murdered for wanting justice and equality. The world is and always has been a nightmare. It just seems worse now because of our phones. What else happened this year?"

That was the opening segment's sharpest comment; Samberg and Oh kicked things off by deeming themselves "the two nicest people in show business" as well as "the only two people left in Hollywood who haven't gotten in trouble for saying something offensive."

After a bit in which they delivered compliments in the tone of vicious insults ("More like Michael B. Buff AF. You a snack, Michael!" "Hey, Bradley Cooper - you are hot."), they did get a bit tougher, mostly to skewer Hollywood cliches.

For example, the practice of "whitewashing" in movie casting:

Oh: " Crazy Rich Asians is nominated tonight for best picture, musical or comedy. It is the first studio film with an Asian-American lead since Ghost in the Shell and Aloha. (At which point Emma Stone called out from the audience: "I'm sorry!")

Samberg: "This year, we saw incredible work like Black Panther, Crazy Rich Asians, If Beale Street Could Talk, Roma, Pose, BlacKkKlansman and many more. They are not just here tonight because they resonated with audiences Hollywood often ignores. They are here because they told stories that resonated with everyone. And that is truly a beautiful thing."

Oh: "Wow, Andy. Can I just say - that you just read all of my lines off the teleprompter?"

Samberg: "What? No. Those are mine. Here, let me keep going. When I was growing up in Canada, the daughter of Korean immigrants - you know what, you are right. That was totally your stuff. Oh my God, I just totally whitewashed your speech. That's how it happens. What an amazing learning experience for me!"

Then, more about Hollywood casting:

Oh: "Claire Foy is nominated for her work in First Man. First Man is also how studios look for directors. (robotic voice) First - man. If no man available, then pair of man. Then team of man. Then eventually, maybe woman?"

Another about celebrities' tendencies to repeat the same thing over and over in interviews:

Oh: " A Star Is Born is nominated for best movie drama. . . . And it just proves, and I'm just coming up with this now, that there can be 100 people in the room. And 99 don't believe in you. And you just need one to believe in you. And that was Bradley Cooper." (At which point, Lady Gaga called out from the audience: "It's true!")

And there was one political dig:

Oh: "Vice is the most nominated film of the night. Vice is an intense drama about Dick Cheney."

Samberg: "But it's actually up for best musical or comedy because it erroneously invaded the wrong category based on false intelligence."

At the end of their speech, Oh (who made jokes about Asian moms and provided antacid to the cast of Crazy Rich Asians to prevent "the Asian flush") got emotional as she talked about the crowd's diversity, which has not always been the case at award shows.

"But if I could take a moment here, in all honesty, I said yes to the fear of being on this stage tonight, because I wanted to be here to look out into this audience and witness this moment of change," Oh said as she started tearing up. "And I'm not fooling myself. I'm not fooling myself. Next year could be different, it probably will be, but right now this moment is real. Trust me, it is real. Because I see you. And I see you. All these faces of change, and now so will everyone else."

(Except for the headline, this story has not been edited by NDTV staff and is published from a syndicated feed.)
Comments
golden globes 2019Andy Sambergsandra Oh