Genelia D'Souza Is "Unsure, Unconfident, Uncertain" As She Begins Her Fitness Journey 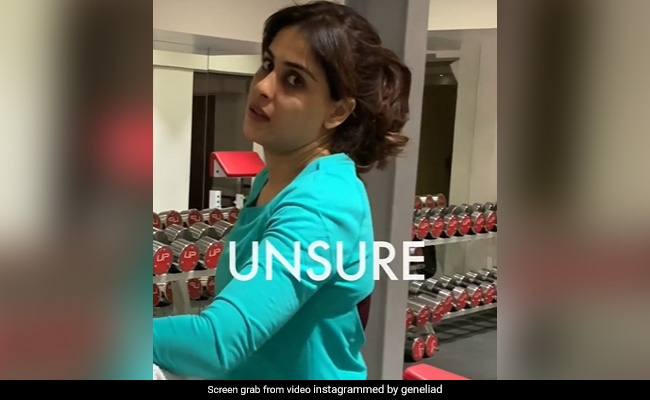 Actress Genelia D'Souza is on a new journey. No, it is not an upcoming film or another entrepreneurial project but a dedicated attempt towards embracing a fitter lifestyle. The actress, who is known for her beautiful looks and acting skills, has shared a video documenting her first week at the gym. And, by Genelia's own admission, the first few days have been anything but easy. In her own words, Genelia confessed, “Week 1 - Unsure, unconfident, uncertain.” In the video, Genelia is entering the gym at 5.30 am and lifting weights with difficulty with some help and advice from her trainer. She even says, “I don't know whether I can do this.”

In the caption, Genelia D'Souza added, “Fitness isn't just about glamourizing it. It's about all those emotions that one goes through, before the journey, during the journey and after the journey. Fail or Fly but I'm taking this journey.” She also added the hashtag “Go Gene Go” and promised a longer vlog soon.

Just two days ago, Genelia D'Souza shared another video from the gym. This time, she is goofing around and using a line of dumbbells as piano keys. In the caption, she said, “Day 1 of the 6 weeks workout plan ahead. But not without some fun.” The video also contains a note that says: “When it's the time to work out and you think it's the time to party.”

Genelia D'Souza is undoubtedly the queen of Reels on Instagram. Recently, she shared a video which begins with her in a bathrobe. Soon the transitions arrive and we see Genelia in not one but two glamorous looks. Sharing the video, the star said, “Nobody ever got ready by waiting. You only get ready by starting,” with heart emojis.

Sharing a set of pictures in a sparkly gown, Genelia  D'Souza said in another post, “Just remember. You are imperfect. Permanently and inevitably flawed. And yet you are beautiful.”

Genelia D'Souza has been married to actor Riteish Deshmukh since 2012. The couple has two sons, Riaan and Rahyl.