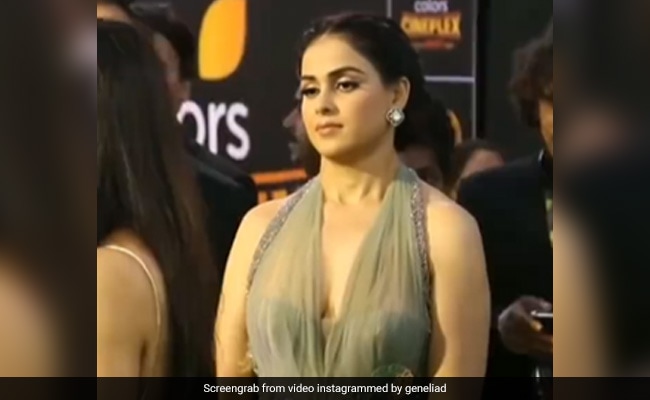 Genelia D'Souza in a still from the video. (courtesy: geneliad)

Remember Genelia D'Souza's priceless reaction from the IIFA Awards 2019 video, in which she can be seen frowning as her husband Riteish Deshmukh greets Preity Zinta? Well, Genelia recently revealed why she reacted the way she did in the video and told Arbaaz Khan on his chat show Pinch: "The actual story is that after a long time, I was attending an award function. I was all dressed up and wore high heels, thinking that I would be okay but we were meeting so many people, we were having conversations, and my feet were killing me. So Preity and Ritesh were having a conversation and unfortunately, the cameraman captured my reaction."

Earlier this year, Genelia D'Souza posted a fun version of what happened next. See the viral video here:

Riteish Deshmukh is all set to make his digital debut on streaming giant Netflix with Plan A Plan B and it will be directed by Shashanka Ghosh. The film will also feature Baahubali actress Tamannaah Bhatia.