Genelia DSouza shared the video on Instagram with a funny caption 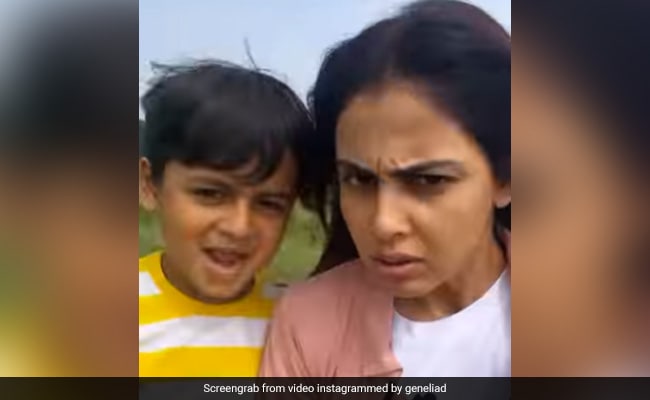 Genelia in a still from the video. (courtesy geneliad)

Genelia D'Souza is the undisputed queen of Instagram Reels. Funny, cute, and downright entertaining, the actress has cracked the code to keep fans hooked to her bite-sized videos. Her Instagram family cannot get enough of these fun videos and Genelia D'Souza always delivers. The actress is often joined by her husband, actor Riteish Deshmukh. The two are seen recreating iconic dialogues, grooving to a song or mouthing hilarious one-liners. But now, it looks like Genelia D'Souza has found a new partner for her Reels, one that even Riteish will approve of. In her latest upload, Genelia D'Souza is seen with her son, Riaan Deshmukh.

Here, Genelia D'Souza and Riaan Deshmukh are seen outdoors when the actress lip-syncs to the line, “Hi guys, yeh main hoon aur yeh...tu kaun hai [Hi guys, this is me and this...wait, who are you]?” before moving the camera to face her son. The little one then goes, “Aeee,” to which she mouths, “Kaun hai tu [Who are you]?”

Sharing the fun video, Genelia D'Souza wrote, “When your son thinks his Aai has lost it but still plays on…” Fans, as expected, loved the funny video and even praised the mother-son duo.

This is clearly not the first time Genelia has left us in splits. A few weeks ago, Riteish Deshmukh joined her in creating a ROFL moment. The premise of the video was, "Meri biwi mujhe bhagwan samajhti hai [My wife thinks I'm God]." Don't be fooled by this one-liner. In the remainder of the clip, Riteish explains that he gets “God-like treatment” from Genelia D'Souza because she only talks to him when help is needed and pretends that he "doesn't exist" otherwise.

In addition to these fun Reels, Genelia D'Souza also shares posts about her tight-knit family. Recently on the occasion of Father's Day, she uploaded a moving video of Riteish Deshmukh with his two sons, Riaan and Rahyl. Her caption read, “Dearest Riaan and Rahyl's Baba, Thank you for being the best dad in the world. I can crib all I want about not having enough time with you but if the boys say B of Baba, they know they have got your attention. I wish I could be as selfless as patient and as amazing with the kids but ain't a chance I can beat you to it.”

On the occasion of her younger son Rahyl's birthday too, Genelia D'Souza posted a heartwarming note. An excerpt from Genelia's note read, “Thank you for all the morning hugs, for the endless cuddles, for always being understanding and assuring me you got my back when it should be the other way around and for just being you...That boy who makes me believe I did something right in life... The boy who just stole my heart away…”

Tripti Dimri's Note To Qala Co-Star Babil Khan: "Your Voice Has The Power To Heal"