In his ROFL breaking down of the God-like treatment he receives from Genelia, Riteish said she only talks to him when help is needed 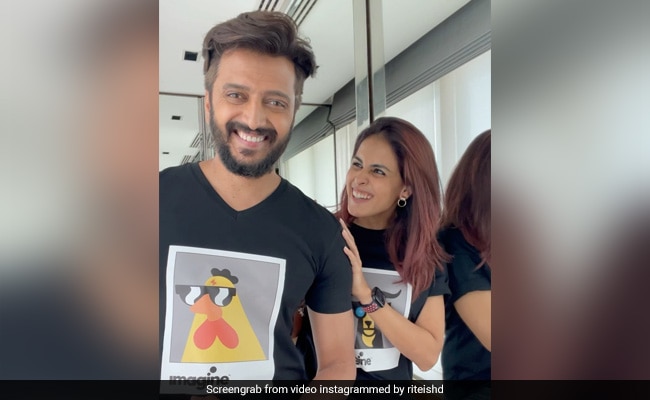 Riteish and Genelia in a still from Instagram video (courtesy riteishd)

We have lost count of the number of times Genelia D'Souza and Riteish Deshmukh made us laugh, and they continue to do so with their Instagram posts every now and then. On Friday, Riteish Deshmukh added another one to the list and oh boy, it will indeed crack you up. "Meri biwi mujhe bhagwan samajhti hai (My wife thinks I'm God)," was the theme of the video, in which Riteish goes on to explain what he means by that. In his ROFL breaking down of the God-like treatment he receives from Genelia, Riteish said she only talks to him when help is needed and "pretends" that he "doesn't exist."

Genelia D'Souza, who is Riteish's partner-in-crime, played the part of the wife he just described beautifully. LOL. Here, take a look:

Riteish Deshmukh and Genelia D'Souza's Instagram is filled with more such videos, which double up as laughter therapy indeed.

However of all their ROFL posts, one turned out to be crazy viral - the one in which Preity Zinta also featured. Earlier this year, the couple trended a great deal for sharing an old video from an award show, featuring the two of them and also Preity Zinta - Genelia's expression is all that the Internet could talk about.

In terms of work, Genelia D'Souza has starred in films such as Tujhe Meri Kasam, Samba, Chennai Kadhal, Santosh Subramaniam, Jaane Tu Ya Jaane Na and Tere Naal Love Ho Gaya. Riteish Deshmukh was last seen in Baaghi 3. The couple got married in 2012 and are parents to two sons.