Gehraiyaan: Ranveer Singh Seals His Review Of Deepika Padukone's Performance With A Kiss

"What an absolute masterclass of a performance, baby," wrote Ranveer Singh 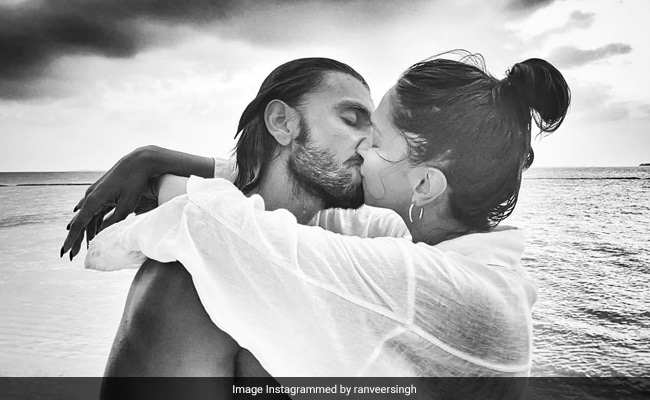 When Deepika Padukone said that husband Ranveer Singh is her "biggest cheerleader" she legit meant it. He's clearly blown away by her performance in new film Gehraiyaan, borrowing lines from the song Doobey to caption a photo of themselves kissing: "Doobey... haan doobey...ek dooje mein yahaan (drowning in each other)." The picture looks like it could be straight out of Gehraiyaan, but for Ranveer in place of Deepika's co-star Siddhant Chaturvedi. Of the actress' performance, Ranveer wrote: "Tour de force. Transcendent, superlative and sublime! What an absolute masterclass of a performance, baby! Such fine, nuanced and heartfelt artistry! At your consummate and peerless best in this one!" Safe to say he was impressed. Just kidding, Ranveer - reviews of Deepika Padukone's performances have uniformly been peppered with superlatives. Here are Deepika Padukone and Ranveer Singh, rolling in the deep:

Just in case it wasn't clear, Ranveer Singh was this excited for the film.

In his review of the film for NDTV, critic Saibal Chatterjee agreed with Ranveer Singh that Deepika Padukone's performance is of the finest quality. "Deepika takes to her role like a fish to water and stamps her presence on the film," he wrote, concluding: "Is there any reason at all why anybody should invest two and a half hours in Gehraiyaan? Yes, only one: Deepika Padukone. She stands tall amid the ruins."

After the trailer's release last month, Ranveer Singh gave a shout out to Deepika and team Gehraiyaan and he wrote: "My baby girl lookin like a Fazillion bucks." He added: "Moody, sexy and intense! Domestic noir ? Sign me up." Ranveer, who has worked with Siddhant Chaturvedi in Gully Boy and Dhairya Karwa in 83, added, "All the favs Shakun Batra, Ananya Panday, Siddhant Chaturvedi, Dhairya Karwa." He referred to Naseeruddin Shah as "Naseer the legend." The actor, who is working with Karan Johar in Rocky And Rani Ki Prem Kahaani, wrote this for the film's producer: "Produced by the sexiest of them all."