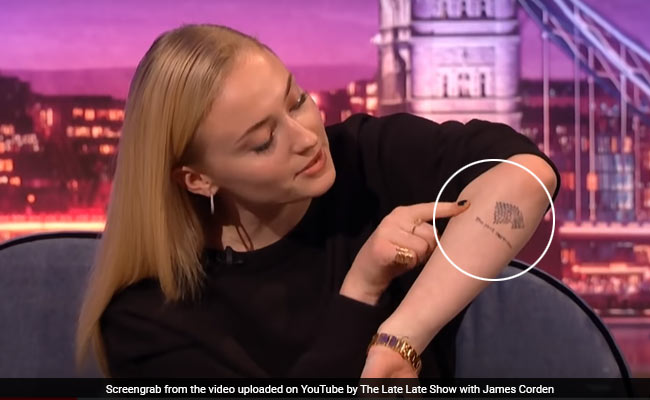 Looks like Sophie Turner played it smart both on screen and off it. On the show, Sansa Stark got Winterfell permanently registered as a free kingdom in King Bran the Broken's eternal memory and IRL, she had her fans convinced that her much talked about "the pack survives" tattoo from once upon a time was not a spoiler. But turns out, it very much was and she rubbed it in our face with a cheeky post today, which said: "The pack survived." Back in June 2018, Sophie Turner got the House Stark sigil - a grey direowolf - permanently inked on her left arm with these words: "The pack survives," when she reasoned it out as "just a quote" for Season 7.

Hours ahead of Sophie's declaration, the Game Of Thrones finale also revealed it wasn't "just" a random tattoo after all but very much the ending summed up in three words. The Stark siblings - Arya, Bran and Sansa - survived eight seasons and a decade of Game Of Thrones and so did their half-brother Jon Snow (half Stark-half Targaryen). Jon Snow killed Dany and got exiled to the Night's Watch, Arya embarked on a new expedition to discover lands West of Westeros, Sansa was crowned as the Queen in the North and Bran became the King of the Six Kingdoms.

Twitter joined the dots and can't believe Sophie Turner's left arm had the ending etched all along but she made us believe otherwise. "So, Sophie Turner's tattoo was really a spoiler after all! The pack did survive," read a tweet while another one added: "Wow, so Sophie Turner's "the pack survives" tattoo really did spoil the ending of Game Of Thrones."

So, Sophie Turner's tattoo was really a spoiler after all! The pack did survive.

Sophie Turner's tattoo was a spoiler after all. #GameOfThronesFinale

Sophie Turner got a tattoo "The Pack Survives" after her final shot of GoT. And he explained "It's just a quote from last season(7)" And that got people thinking. Well not anymore. #TheFinalEpisode

Some netizens such as this one finally made the confession: "Sophie Turner gave us the biggest spoiler by showing us her 'The Pack Survives' tattoo and none of us took it seriously. Wow, we stupid."

Side bar: Sophie Turner gave us the biggest spoiler by showing us her 'The Pack Survives' tattoo and none of us took it seriously, wow we stupid. pic.twitter.com/UubLNUVhYo

Now i get the reason behind sophie turner's tattoo.

First tattoo back home! Thank you so much for getting this from me @sophiet ! bad ass !

Last year, Sophie Turner buried the spoiler speculation by telling James Corden on his The Late Late Show: "It's just a quote from last season but everyone figures that the pack really does survive. But it's just a moral I like to live by."

Meanwhile, this is what she posted on Game Of Thrones finale day.

Sansa, Thank you for teaching me resilience, bravery and what true strength really is. Thank you teaching me to be kind and patient and to lead with love. I grew up with you. I fell in love with you at 13 and now 10 years on.. at 23 I leave you behind, but I will never leave behind what you've taught me. To the show and the incredible people who make it, thank you for giving me the best life and drama lessons I could have ever asked for. Without you I wouldn't be the person I am today. Thank you for giving me this chance all those years ago. And finally to the fans. Thank you for falling in love with these characters and supporting this show right through till the end. I'll miss this more than anything.