Why Game Of Thrones Finale Ratings Could Be A Trendsetter

A full 19.3 million people tuned in to watch the finale of Game of Thrones across all HBO platforms on Sunday night 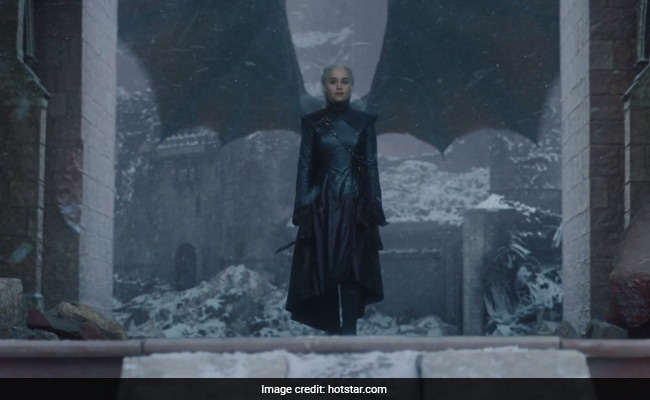 A still from the finale of Game Of Thrones. (Image courtesy: Hotstar)

A full 19.3 million people tuned in to watch the finale of Game of Thrones across all HBO platforms Sunday night - a number that outdid the already-high expectations for the fantasy phenomenon.

But maybe even more important, the 19.3 million surpassed another metric far away from pay cable and may have signaled a historic shift in the process. Pay television is now on the rise in a way it never has been before - competing with widely available entertainment in a way never thought possible.

First, a little bit on those gargantuan "Thrones" numbers themselves. The 19.3 million was a season high, and indeed a series high. (About 13.6 million tuned in to HBO at 9 p.m.; the remainder watched later or on streaming platforms.) It tops the nearly 17.4 million who tuned in to this eighth season's opener and the 18.4 million who watched the penultimate, burn-it-to-the-ground episode.

Compared to other HBO finales, Sunday's 19.3 million is downright meteoric. The Sopranos landed 11.9 million for its series finale in a pre-streaming 2007, while Sex and the City drew 10.6 million for Carrie's return to New York in 2004 - meaning Game Of Thrones nearly doubled the numbers of HBO's previous biggest hits. That's a lot, even accounting for the upticks in the U.S. population (about 10 percent) since those 2000's-era airings.

But merely saying Game of Thrones is the biggest pay-cable phenomenon of all time is like saying a dragon has some plans and agency: Everybody knows that now. The more telling comparison may be to another show, on the very other end of the dial. Because just a few days before Bran ended up in power, another giant company was airing the finale of longtime juggernaut. CBS wrapped up The Big Bang Theory - 279 episodes of sitcom-y goodness - with the last-ever episode.

That airing? It averaged 18 million total viewers. That's a nice number on its own. But it is somehow less than Game of Thrones streaming-enhanced number, even though as a broadcast show nearly every person in America could watch it.

Now, there's a little bit less of a dramatic payoff with finale for a show like Big Bang. Still, it's hard to ignore the trend in recent decades of broadcast finales, even comedies, sliding down. Way down.

The 1983 finale of M*A*S*H is the most-watched scripted television episode in history with 105.9 million viewers (nearly half the U.S. population at the time). In the 1990s Seinfeld garnered 76.3 million viewers. And in 2004, 52.5 million gathered around to say goodbye to Friends. A steep slide in just two decades.

The numbers continued to drop from there - on CBS, for instance, the Everybody Loves Raymond finale drew 33 million just a year later.

The heated debate in industry circles in recent years has been whether traditional television can still flourish in the age of streaming. After all, companies like Netflix and Apple are upending the model with their spending and new distribution methods. And viewers are more distracted and segmented than ever.

In one sense, yes. Game of Thrones proves that appointment viewing is alive and well even in these fragmented times. What was remarkable about "Thrones" is how it built momentum, episode to episode, season to season, just like a traditional show, eventually culminating in a new high at the start of its last season and an all-time high in its last-ever episode.

Also, everyone gathered around at the same time to talk about that episode. That's as old-school as it comes. (It's just that, thanks to social media, we can talk about it with more people.)

In short, anyone looking for hope that people will still watch communally have plenty to be heartened by in the Game of Thrones viewing patterns.

But in another sense an era has decidedly ended. For many years large swaths of people would engage in this kind of communal activity for a show that's readily available to anyone in the country. They would gather without paying 10 or 15 dollars per month first - without making a purchasing choice in advance of their obsession. Then they'd sit through ads (themselves often an event during these shows) to consume it.

For years that kind of viewing was thought innately bigger than the kind people had to pay for simply by dint of its footprint. As of Sunday night that era is gone.

(Except for the headline, this story has not been edited by NDTV staff and is published from a syndicated feed.)
Comments
game of thronesgame of thrones finale