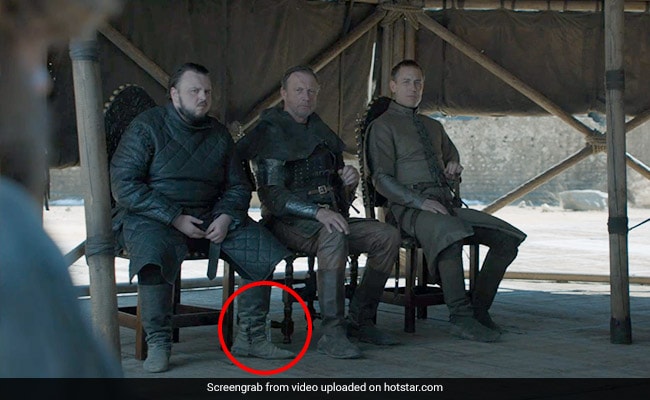 A still from Game Of Thrones (courtesy Hotstar)

Spoiler alert! If you haven't watched Game Of Thrones Season 8 Episode 6, too bad. You can't go ahead without spoilers. The rest, read on. Did Bran know all this while that the viral Starbucks coffee cup in Winterfell had its water bottle counterpart waiting in King's Landing? Fans pointed out what appears to be yet another Game Of Thrones blooper after episode 4's coffee-gate. In the scene where Grey Worm presents Tyrion Lannister in front of the council trying to decide the fate of Westeros and who sits on the throne, fans spotted a plastic water bottle half hidden behind Samwell Tarly's left foot. "A water bottle in King's Landing!" read one of the umpteen tweets that followed while another added: "HBO, explain yourselves."

Here's when a water bottle played hide-and-seek with Game Of Throne fans all way from King's Landing.

But it's not like Samwell Tarly and Ser Davos shared one bottle between them. Pfft, no way. Ser Davos got one of his own but maybe, just maybe, forgot to place it out of the frame.

It's not just there, I actually found the second water bottle next to Ser Davos. #GameOfThronespic.twitter.com/rZHqiWmDU4

#GameOfThrones Who do you think this plastic bottle belong to ? pic.twitter.com/X1mBiU0nFi

"First Starbucks, now a water bottle. This show is a joke," read another tweet while the general sentiment on Twitter was: "Seven hells, they did it again."

LMAOOO I CAN'T BREATHE THEY DID IT AGAIN First Starbucks now a water bottle this show is a joke #GameOfThrones#GameOfThronesFinale#TheFinalEpisodepic.twitter.com/9YaFF8Pnm6

game of thrones was good and all, but did y'all see the water bottle?! #GoTS8#GameofThronespic.twitter.com/gZMQ20qha0

Seven hells, they did it again. It's a plastic water bottle... #gameofthronespic.twitter.com/IU3SEXdis8

Did you notice that ? this time bottle of water #GameOfThrones#GOTfinalpic.twitter.com/pUDIu0dyxP

In the fourth episode of this season, a Starbucks coffee cup appeared on the screen for almost two seconds when the North and Daenerys Targaryen were celebrating their win against the Night King. After being roasted by netizens, HBO attempted to lighten the situation with a statement to Variety: "The latte that appeared in the episode was a mistake. Daenerys (the character Daenerys Targaryen played by Emilia Clarke) had ordered a herbal tea." Starbucks Coffee tweeted and said: "TBH we're surprised she didn't order a Dragon Drink."

After the coffee cup blooper, the Game Of Thrones makers should have doubled their blooper repellent methods especially when fans are already grumbling over the showrunners' 'incompetence' about writing over beyond the source material - George RR Martin's A Song Of Fire And Ice, which he hasn't finished yet. A petition demanding the final season be remade began in Texas earlier this month with 760,000 signatures being collected within a day, reported AFP. Earlier, complaints about editing issues and the Battle Of Winterfell being too dark to see anything were lodged by fans.