Game Of Thrones Finale Review: The North, And We, Will Remember (Spoiler Alert)

A once-grandiose show, Game Of Thrones goes out on a goofy note, just like the high fantasies it once critiqued. 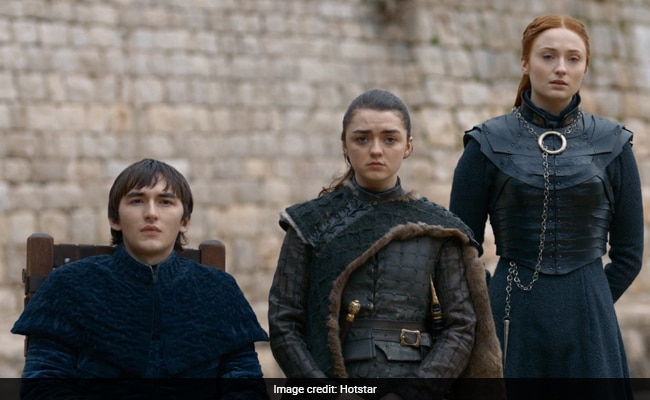 Well, I called it. I just didn't expect that it would be this goofy.

Back in April, I wrote that there was only one way Game Of Thrones could end: "For Game Of Thrones to be true to its argument, its protagonists must be destroyed by the systems they've attempted to transcend or give way to something entirely new. If Daenerys follows in the tradition of her ancestors and goes mad; Jon has to kill her; or if the messy mass of humanity can't stand against the implacable, snowy discipline of the White Walkers, the repudiation of the dream that one good person can save us that Game Of Thrones began in its first season will be complete. But there is one alternative: a happy ending for Martin's characters, and for the occupants of the world torn by warring kings where we've spent so long. In this ending, they might be to walk away from the Iron Throne entirely and allow a new kind of government to push forth hopeful shoots in its place."

In its final episode, Game Of Thrones did basically that, though with more callbacks to Tyrion's brothel stories and less genuine pathos than I'd expected. Jon Snow (Kit Harington) killed Daenerys Targaryen (Emilia Clarke) after she announced her intention to basically pull a John Bolton; as a result Jon gets himself exiled back to the Night's Watch and a life among the Free Folk. Sansa Stark (Sophie Turner) crowns herself queen of an independent North. Tyrion Lannister (Peter Dinklage) comes up with the idea of parliamentary democracy, and poor Samwell Tarly (John Bradley) dreams up direct democracy and gets shot down for it. Bran Stark (Isaac Hempstead-Wright) announces that he is the collective memory of Westeros and gets him crowned king, because who cares about carefully-constructed mythology except when it's convenient for wrapping up a show in a hurry.

The series ended the way it probably had to, though in a fashion that revealed both co-showrunners David Benioff and D.B. Weiss's weaknesses and the way the strengths of their cast often carried this lumbering series through anyway.

For a show that was so often, and so effectively, about women, the final episode of Game Of Thrones spent most of its time on men. For reasons of both theme and execution, this was a mistake. After all this time, seeing Sansa crowned should have been an absolute triumph. And while it was delightful to see her shut down her feckless uncle Edmure Tully (Tobias Menzies) in the midst of his pitch to be the first elected king of Westeros, it is wild that Game Of Thrones condensed her bid for Northern independence into a couple of sentences. The closest we got to the resonance that scene deserved was Jon's admission, at long last, that Sansa - who he tried to deride earlier in the season during his reunion with Arya - is capable, strong and brilliant, a better Queen in the North than he ever would have been.

Similarly, it was genuinely affecting to see Brienne of Tarth (Gwendoline Christie) filling in Jaime Lannister's (Nikolaj Coster-Waldau) entry in the Book of Brothers, the record of the knights who served in the Kingsguard. But it felt rushed and odd to have the conclusion of her story be recording the life of the man who loved and left her.

Arya Stark's (Maisie Williams) conclusion felt...fine, I suppose. To a certain extent, she got her grand finale last week, when Sandor Clegane (Rory McCann) persuaded her to turn away from revenge. Game Of Thrones has long established that there is no real place for Arya in Westeros, not even a Westeros where women can crown themselves queens and serve as Lord Commanders of the Kingsguard. She is not a spunky, Tamora Pierce-style heroine who can fit neatly into one of the available roles in the new governments forming in King's Landing and Winterfell. Arya is a lone wolf, and even if her journey off into the unknown felt a bit reminiscent of "Shakespeare in Love" or Frodo sailing off with the elves, it was still elegiac and hopeful in equal measure, a balance the episode did not exactly strike with consistency.

And so I come to Daenerys Targaryen (Emilia Clarke), and two fatal decisions that may define Game Of Thrones in the long term.

The first, and most consequential, is Benioff and Weiss's decision to make two truncated final seasons of the show, a choice that may go down as one of the worst in recent television history. The fact that this final episode detoured into what was, effectively, a "previously on" recap delivered by Tyrion Lannister (Peter Dinklage) seemed like an acknowledgment that viewers might not remember Daenerys's long march to the Iron Throne.

Some of us do remember, of course: We've spent so long steeped in not just the show but in George R.R. Martin's books. Still, I think there's no denying that Benioff and Weiss could have made good use of more episodes to build up to Daenerys's breaking point and to develop the tensions around her messianic vision in a way that would have paid substantial dividends in this final run of episodes. I largely agree with this lovely eulogy for the hero Daenerys might have been. But oh, for a season with enough breathing room after the aftermath of the scourging of King's Landing, for Daenerys' death to be the penultimate episode of Game Of Thrones, and for the task of picking up the pieces to occupy a final hour. Instead, Daenerys, once the show's ostensible hero, ended up feeling like a plot point to be dispensed with, rather than a great and tragic figure to be truly mourned and reckoned with.

The second problem, unfortunately, is Harington and Clarke themselves, the most prominent weak links in what was otherwise an astonishingly strong cast. Given that the events of Game Of Thrones came down to Jon and Daenerys, the finale was always going to be a test of whether they could overcome their limits as actors. As it turned out, both these two protagonists and the actors who played them were pretty much who we thought they were. And a much more interesting set of actors, and a much more consequential set of questions, got squeezed into a few ridiculous scenes about setting up the new government of Westeros.

In the lead-up to the finale of Game Of Thrones, a widely-circulated piece by Zenyp Tufecki argued that Game Of Thrones was perturbing fans in its final season because it had shifted from a sociological look at a fictional kingdom to a story dominated by personalities. I don't think that's quite correct: Game Of Thrones was so effective because it looked at the effect of broad social phenomena and norms on specific personalities, and derived a lot of its plot mechanics from the way those specific people responded to those norms - or defied them. The very conflict that sets up the story is personal: Robert Baratheon (Mark Addy) believes that a prince of the realm has kidnapped and raped his bride-to-be, and he sets off a war that upends the ruling dynasty as a response.

But it's absolutely the case that Game Of Thrones ends on a note that is as fantastical and optimistic as anything that happens in the high fantasy it ostensibly critiqued. In under an hour of television, the beginnings of parliamentary democracy come to Westeros. The Unsullied and Dothraki don't either fight last stands or pillage Westeros. The Iron Bank apparently forgets the crown's debts, and Bronn (Jerome Flynn), now the lord of Highgarden, is apparently set to become the realm's bank and breadbasket. Women get to be knights and the women who don't are apparently going to be denied the pleasures of Podrick Payne (Daniel Portman), unless the Kingsguard no longer requires a vow of celibacy. Married men get to become maesters of the Citadel. Winter apparently skedaddles in a reasonably timely fashion. The Lord of Light decides he's had enough to do with this cursed continent and high-tails it back to Essos. And Game Of Thrones, a show that once spent episodes trying to figure out how the Starks could get control of a single bridge, just sort of waves at it all and assumes that those of us watching at home will be fine with it.

I actually sort of chuckled when Jon was reunited with his direwolf Ghost, once a powerful magic creation but now reduced to a loyal, very big Good Dog. It was a fitting reunion, and conclusion, for a show that shrunk itself down to size in exactly the same way.