Game Of Thrones 8: The Plots Thickens, What To Expect In Episode 2

Things are heating up in Winterfell, at least according to the teaser trailer. 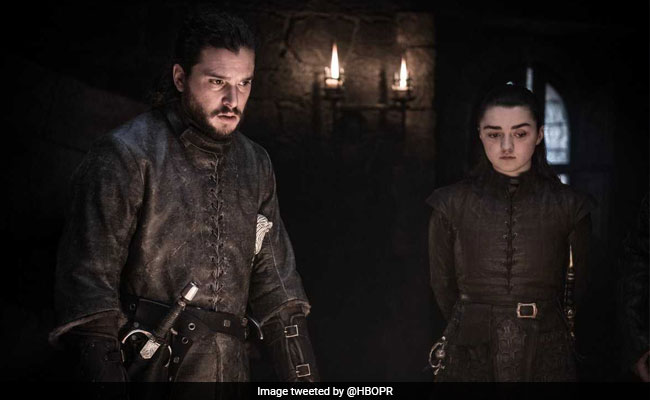 A still from Game Of Thrones 8. (Image courtesy: Twitter)

Because your thirst for Game of Thrones content is as unquenchable as the Night King's thirst for murdering all of humanity, here is a piece in which I break down the teaser trailer and make wild predictions for the next episode.

(As always, this contains a multitude of spoilers. Otherwise, it would be very short.)

The Jaime in the room

The first thing stressed in the teaser is how there's one reunion that might not be as joyful as the others stuffed into last week's rom-com-esque Season 8 premiere: That between Jaime Lannister and ... like, everyone. Because you know the old saying: Secretly father several children with your twin sister, kill a whole bunch of people, betray some others, throw a child from a castle window, and karma just might come back to bite you!

The teaser opens with a shot of Jaime standing in the middle of Winterfell's great hall, soundtracked by a voice-over from Daenerys Targaryen.

"When I was a child, my brother would tell me a bedtime story about the man who murdered our father. And all the things we would do to that man," the queen of dragons says, as the camera cuts to reveal that she's speaking directly to Jaime.

Amid all this, Bran Stark/the Three-Eyed Raven/guy who probably wore a trench coat to high school in the summer, stares on impassively at Jaime. It might seem as though Bran doesn't really care about Jaime anymore, but he's not Bran anymore (as he told everyone who would listen last episode).

Still, this is a pretty tense situation for Jaime. Remember, he's called the Kingslayer because he killed King Aerys II Targaryen, aka the Mad King.

Jaime may have been right to slay the king, who had lost his mind. But it's tricky, because Jaime was a member of the Kingsguard, meaning he was sworn to protect the very king he ended up killing. Plus, when Robert Baratheon took the throne, Daenerys was exiled to the male-dominated Essos. And, yeah, she got some dragons and an army and some nice memories (looking at you, Daario) out of it, but as Liz Phair has taught us, exile in guyville really isn't that good of a time.

Plus, there's the whole thing where Jaime paralyzed Bran simply for catching him, ah, carnally enjoying his twin sister and the mother of his (mostly dead) children.

Needless to say, things are a little awkward.

The Cersei in the room

So, remember how Tyrion Lannister, once the "cleverest man alive" (at least in Sansa Stark's mind), now seems to just make a series of mind-numbingly bizarre missteps? The latest, as we know, is trusting Cersei/current Queen of the Seven Kingdoms/1988 Madonna. Tyrion just decided to look past all the times she tried to kill him (and pretty much everyone else who is not Jaime or her children).

The teaser seems to address this by showing a frightened-looking Tyrion as Daenerys goes into no-nonsense mode and tells Sansa, "He never should have trusted Cersei."

But Sansa spits back like a teenager, "You never should have either." It seems to be a reference to Daenerys's belief that Cersei would send her army to help out in the north, since she saw a wight. Sansa is 100 per cent right here: It's beyond stupid for anyone to have trusted Cersei, much less two of the smartest people on the show.

It's also possible Sansa is trying to help Tyrion here. Remember, the two were once engaged on Tywin Lannister's command, but Tyrion assured her that they wouldn't have to consummate the union. It's sad that passes for "kind" in this world, but it does - and Sansa might feel some gratitude toward him.

The upcoming battle in the room

The rest of the teaser centers on an upcoming battle. We already know that one episode (likely the third) will essentially be an enormous battle at Winterfell. Sunday's episode might be preparing for it.

Hints include: Arya Stark's got a bow and arrow, and she's definitely not at sleep-away camp target practice. Lovebirds Grey Worm and Missandei, who don't really seem like the PDA types, kiss passionately as soldiers run around them. There's a lot of unfortunate facial expressions from Ser Jorah, Jon Snow and others. Plus, Tyrion is staring out between the castle's turrets with an even-more-consternated-than-normal look on his face. The beating drums also don't inspire confidence.

"How long do we have?" Snow asks Tormund, who responds, "Until the sun comes up tomorrow."