Game Of Thrones 8: Jon Snow Has Some Decisions To Make Now That He Knows The Truth 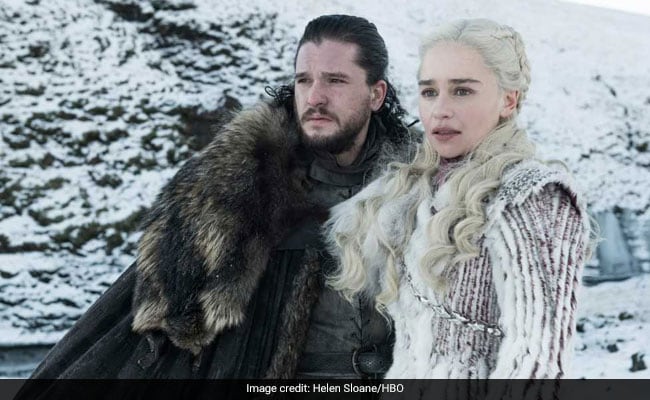 Game Of Thrones 8: A still from the show. (Image credit: Helen Sloane/HBO)

This post contains spoilers for Game Of Thrones season 8, episode 1.

Leave it to Jon's Day One to break the news during Sunday's season premiere of Game Of Thrones. While in the crypt, Sam Tarly (John Bradley) tells Jon (Kit Harington) that he's not actually the son of Ned Stark, nor a bastard but actually a Targaryen, son of Rhaegar Targaryen (the Mad King's son and Daenerys' brother) and Lyanna Stark (Ned's sister). Ned, it turns out, pretended to be Jon's father in order to protect him, as a promise to Lyanna.

"You're the true king: Aegon Targaryen, Sixth of His Name, Protector of the Realm, all of it," Sam says.

Jon looks like he's seen a ghost, which, understandable! "Daenerys is our queen," he sputters out. "She shouldn't be," Sam says. "That's treason," Jon replies, to which Sam keenly observes, "It's the truth."

Now Jon knows: Ned Stark is his uncle and the Stark kids are his cousins; he's the heir to the Iron Throne; and he's been hooking up (and maybe falling in love) with his aunt.

So he has some decisions to make.

There are plenty of risks in publicly revealing such information, the least of which is the chaos it would spark in the North, where the undead are headed and the living are already suspicious of Daenerys (Emilia Clarke). And, more than anyone, Jon is Team Who Cares About Politics, so maybe he'll stay quiet in order to keep a united front in the face of the Night King.

We were also reminded during the premiere that Daenerys has got quite a temper, particularly when it comes to people questioning her authority as queen. She has dragon fire for those who won't bend the knee, and she's not afraid to use it (see: Sam Tarly's brother, father). Jon's parentage threatens Daenerys and what has fueled her throughout the show: the unwavering belief that she's the rightful heir to the Iron Throne.

So, yeah, Jon has plenty of reasons to keep quiet - except Jon cares a lot about telling the truth. Remember his annoying refusal to lie to Cersei Lannister (Lena Headey) when it seemed that's what was needed to form a humanity-saving alliance?

Then there's the more pressing matter of his growing love affair with Daenerys. Davos Seaworth, Varys and Tyrion Lannister all gabbed during the season premiere that maybe these two love birds should just make it official already.

But now Jon knows he's sleeping with his aunt. Incest is generally a huge no-no in Westeros, and, plausibly, Jon is grossed out by it. But maybe it wouldn't be such a big deal to Daenerys, especially given that the Targaryens wed brothers and sisters for 300 years "to keep bloodlines pure," as Cersei Lannister put it during season 1.

Some of the Targaryens born from generations of brother-sister couples appeared to exhibit madness. "Half the Targaryens went mad, didn't they," Cersei previously remarked. "What's the saying? 'Every time a Targaryen is born, the gods flip a coin.' "

People have been keeping an eye on Daenerys to see if she's showing signs of her father's power hungry blood thirst, the kind that led him to want to blow up King's Landing and kill all its civilians rather than surrender to invading forces. So maybe Jon will come clean if he sees Daenerys go off the deep end. "You gave up your crown to save your people," Sam tells him. "Would she do the same?"

If Jon does decide to go public, he can use the evidence Sam gathered and Bran's all-seeing powers. And, lest he not be believed, he can point to the fact that he can ride dragons with no problem.

One thing we do know for certain: All that brooding Jon Snow has exhibited thus far will only increase as he agonizes over what to do.