Game Of Thrones 8, Episode 2: What To Expect, From Jaime Lannister's Trial To The Beginning Of The Great War

Game Of Thrones 8: Jaime Lannister is in Winterfell - will Daenerys pardon him for murdering her father? 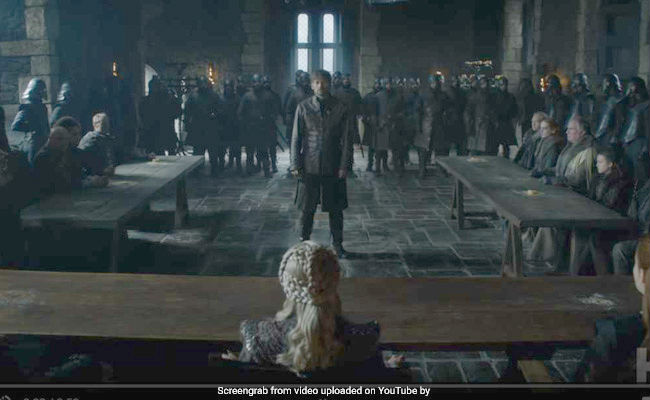 Game Of Thrones 8: A still from the show. (Image courtesy - YouTube)

Done with the first episode of Game Of Thrones 8? The show premiered with a bang on Monday and it appears no one can stop talking about - be it about the dragons, Bran Stark and Jaime Lannister fleeting meeting or anticipating Jon Snow's next move after he learns about his true identity (thank you, Samwell Tarly). As fans of the drama series shred the episode scene-by-scene, we take the next step and breakdown the promo of episode 2 to figure out what can we expect on next Monday. Game Of Thrones 8 has only eight episodes and the plot is moving with quick pace. The Army of the Dead was almost at Winterfell by the end of the season premiere (remember the Night King's message?) and the promo drops a hint that the first part of the Great War is about to commence.

Here are 4 giveaways from the promo of Game Of Thrones 8, episode 2:

Life Comes Full Circle For Jaime Lannister: In the last moments of episode one, Jaime Lannister arrives at Winterfell all by himself having rebelled against his lover sister Cersei Lannister, the current Queen of Seven Kingdoms. But it won't be a cakewalk for Jaime in Winterfell. Firstly, he has to come to terms with what he has made of Bran Stark after pushing him off a tower years ago. Secondly, he will be tried in Queen Daenerys' court.

Jaime Lannister is loathly called Kingslayer. He was Daenerys' father Aerys II Targaryen's Kingsguard but he killed the King to help Robert Baratheon take over King's Landing. The promo begins with Daenerys recounting how she spent her childhood thinking what she would do with her father's murderer. But we know that Tyrion, who is Daenerys' hand, has a soft corner for his brother and knows that his participation in the war(s) to come can benefit them. He may convince Daenerys to pardon Jaime.

But what about the Starks? Will they forgive Jaime for what he did to Bran?

The Beginning Of The Great War: At the end of episode 1, the Night King sent a message saying he's closer than the folks in the North think and now, it appears they do not even have a day. In a scene, Jon Snow asks Tormund how much time they have before the Army of the Dead strikes and he replies: "Before the sun comes up tomorrow."

Jon Snow is backed by the Free Folks, members of the Night's Watch and Daenerys' army, including the Dothraki, the Unsullied and two dragons. Though Jon and Daenerys are expecting Cersei's support, we know that's not going to happen in a million years, Maybe, Jaime updates them too.

Sansa Trusts Daenerys Targaryen: The northern lords, including Sansa were not thrilled to discover that Jon Snow gave up the title of the King in the North and bent the knee before Daenerys Targaryen. Sansa doubts if Jon solely did it to unite the armies against the Army of the Dead or if he has fallen in love with Daenerys. From the first episode, it was very clear that Sansa did not trust Daenerys.

But a scene from the promo depicts them apparently bonding over their mutual hatred for Cersei Lannister.

Arya thought that The Mountain (Sandor Clegane) was dead and she was unpleasantly surprised to watch him enter Winterfell along with Jon Snow and Daenerys's army procession. She briefly catches up with the Mountain before asking Gendry to make a weapon of her design. In the promo of episode 2, Arya says, "Death... it has many faces. I look forward to seeing this one."

Despite her animosity with The Mountain, Arya appears to be a sensible person who realises that the real threat is the undead. Or does she?

Watch the promo of Game Of Thrones 8, episode 2 here: