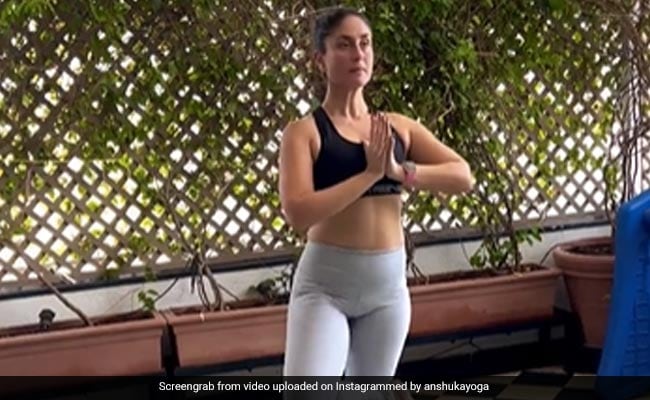 Kareena Kapoor in a still from the video. (courtesy: anshukayoga)

Keeping up with Kareena Kapoor's fitness diaries, her yoga instructor shared a video of the actress on Wednesday evening. In the video, Kareena Kapoor can be seen acing a couple of yoga asanas with utmost ease. The caption on the video shared by Anshuka Yoga's official Instagram page read: "Flow with Bebo Kareena Kapoor. Remix it now - show us how you flow." The post was accompanied by the hashtags #YogaFlows, #Yoga, #YogaDaily and #YogaAsana. Kareena Kapoor swears by yoga and often shares posts pertaining to it on her social media handle.

Check out the video of Kareena Kapoor doing yoga here:

A quick glance through Kareena Kapoor's Instagram profile, reflects her love for yoga. The actress shared this video with an ROFL caption a few months ago. She wrote: "When your yoga instructor follows you on Instagram, you know it's time to say bye to the biryani and halwa #UntilWeMeetAgain."

Because one post is not enough to reflect what a fitness enthusiast Kareena Kapoor is. "Back at my most favourite spot...My yoga mat with my favourite girl...long road ahead but we can do this Oh! Is that my car at the back," she captioned this post.

On the work front, Kareena Kapoor was last seen in Aamir Khan's Laal Singh Chaddha, which released last month. She will next be seen in The Devotion of Suspect X, co-starring Vijay Varma and Jaideep Ahlawat. The actress has also signed a project with Rhea Kapoor.