Alaya F, too, introduced her fans to Dr Freddy Ginwala with an Instagram post. She wrote, “Are you ready for Freddy?” 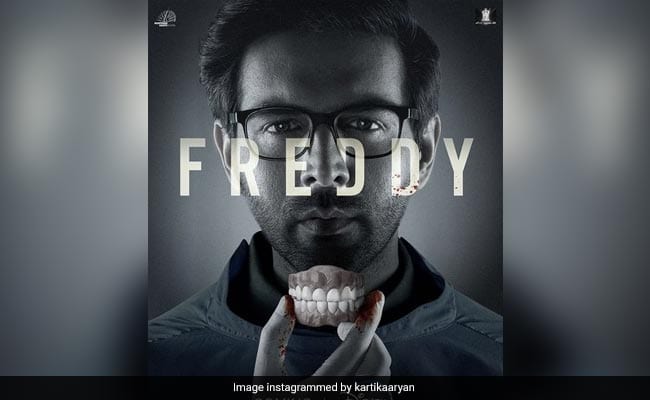 Are you ready for the first look poster of Freddy? It is finally here. Kartik Aaryan, on Friday, shared his first look as Dr Freddy Ginwala from Shashanka Ghosh's next and let this be known, it will give you goosebumps. Wearing a surgery uniform and a pair of glasses, Kartik aka Dr Freddy Ginwala looks grim. He is holding dentures and has blood on his fingers. The poster has an eerie and dark vibe. The film, which also stars Alaya F in the lead role, will premiere on Disney+Hotstar. The makers have not announced the release date yet. Sharing the first look poster, Kartik Aaryan wrote, “Dr Freddy Ginwala. Appointments opening soon. Freddy.” The actor also added a turtle and a black heart icon, which he has been using for any updates on Freddy. Within an hour, Kartik's post garnered over one lakh likes.

Alaya F, too, introduced her fans to Dr Freddy Ginwala with an Instagram post. She wrote, “Are you ready for Freddy?”

A few hours before sharing the first-look poster of his character from Freddy, Kartik Aaryan raised excitement among his fans with this post. It shows a turtle with broken and bloodied dentures holding a red rose kept atop it. The actor prepared his fans for the first look of Dr Freddy Ginwala like this, “Slow and steady wins the race. Be ready to enter the world of Freddy. First look aa raha hai.” Creepy, right?

Freddy marks Kartik Aaryan's first film with Alaya F. The duo wrapped the shooting in September last year. Sharing fun pictures and videos from the last day of the shoot, the actor wrote, “It's a wrap! A character that will always stay like a shadow with me. Freddy will see you at the theatres.”

The film went on floors in August last year. In a statement back then, Kartik Aaryan spoke about “venturing into an uncharted territory” with Freddy. "I'm venturing into an uncharted territory which is both exciting and intriguing in equal measures. I look forward to dwelling in the world of Freddy and bringing alive this dark romantic thriller,” he was quoted as saying by the news agency PTI.

Freddy is produced by Ekta Kapoor and Jay Shewakramani.