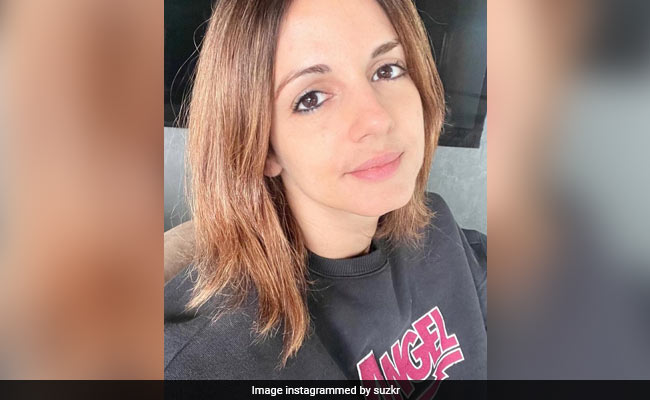 Sussanne Khan gave us a glimpse of her Tuesday morning face with her latest Instagram entry and we must say that it's all things cute. The 42-year-old interior designer can be seen acing the no make-up look in the picture as she wears just the right amount of kajal in her eyes and keeps the rest of her look natural. In the picture, Sussanne Khan can be seen wearing an uber cool grey sweatshirt with 'Angel' written over it. While she is wearing an 'Angel' sweatshirt in the picture, the interior designer's caption is all about "devils." Sharing the picture on Instagram, she wrote: "We are all in the same game, Just different levels, Dealing with the same Hell, Just different devils, #WearYourAngel #BeBrave #strengthcureseverything #2021."

Sussanne Khan received several comments on the post including a comment from her rumoured boyfriend and actor Arslan Goni. Arslan who is the cousin brother of TV actor and Bigg Boss 14 contestant Aly Goni, dropped a devil emoji in the comments section of Sussanne Khan's post.

Sussanne is quite consistent with her Instagram game and she keeps communicating with her Instafam through pictures and videos. This weekend when Mumbai was under a lockdown due to the rising COVID-19 cases, the talented interior designer gave us a glimpse of her stunning house. She shared a video on Instagram featuring her dog and the black and white living room of her house. "And then we keep ourselves entertained by going back into days filled with music, cooking, reading and our barking babies," she wrote in the caption of the post.

Besides other posts, Sussanne also shares her workout videos on social media. The 42-year-old mother of two sons, surely knows how to ace the intense training sessions. Earlier this month, the interior designer had shared a new workout video on Instagram. In the video, she could be seen exercising with the utmost ease as the track Breathe played in the background. "Jump, stand up, step down and jump again. Practice makes you perform better," she wrote in the caption of the post.

Daughter of actor-producer Sanjay Khan, Sussanne Khan was married to Bollywood actor Hrithik Roshan until 2014 when the couple decided to get divorced. Hrithik and Sussanne are parents to two sons Hrehaan and Hridhaan.

Arjun Rampal, "Free Of COVID" Now, Shares How He "Recovered So Fast"