For Sridevi, A Tribute From Mohit Marwah, For Whose Wedding She Was In Dubai

Sridevi died in Dubai, where she and the other members of the Kapoor family were attending the wedding of actor Mohit Marwah 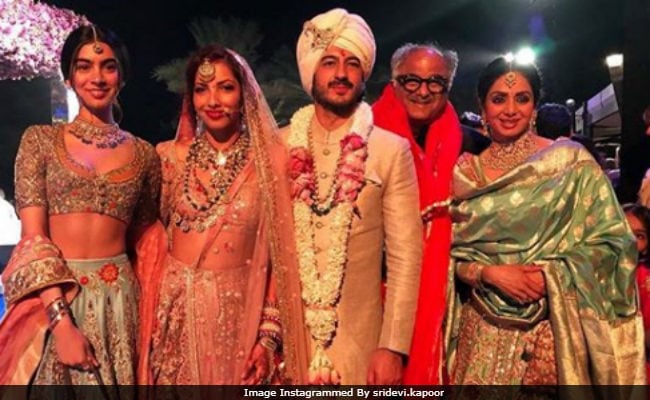 New Delhi: Megastar Sridevi died at 54 in Dubai, where she and the other members of the Kapoor family were attending the wedding of actor Mohit Marwah. He is a nephew of the Kapoors. The wedding festivities had begun last week and Sridevi, Boney Kapoor and younger daughter Khushi flew to UAE (minus Janhvi). Newlywed Mohit Marwah shared Sridevi's still from her 2012 comeback film English Vinglish and wrote, "You were more than a legend. Your vacuum will always be felt." Sridevi died late Saturday. She was the star of blockbusters like Sadma, Lamhe, Nagina, Mr India, Chaal Baaz and Chandni.

Mohit Marwah married Antara Motiwala last Tuesday at a resort in UAE's Ras Al Khaima. Sridevi was the first one to share a picture of the newlyweds on social media and captioned it as, "Antara Marwah."

Sridevi's dance with husband Boney Kapoor from the wedding went viral on Sunday.

Her recent Instagram posts are from Mohit and Antara's wedding.

@farazmanan thank you so much for the beautiful outfit

Promoted
Listen to the latest songs, only on JioSaavn.com
After Sridevi's death was announced, brother-in-law Sanjay Kapoor said that the whole family was in shock with her sudden death and added that she had no history of heart ailment. "We are completely shocked. She had no history of a heart attack," Sanjay Kapoor had told Khaleej Times, reported news agency IANS. He reached Dubai on Sunday morning after receiving the news.

Meanwhile several celebrities reached Anil Kapoor's Mumbai residence after hearing of Sridevi's sudden death. Her body will be flown to Mumbai on a private jet.