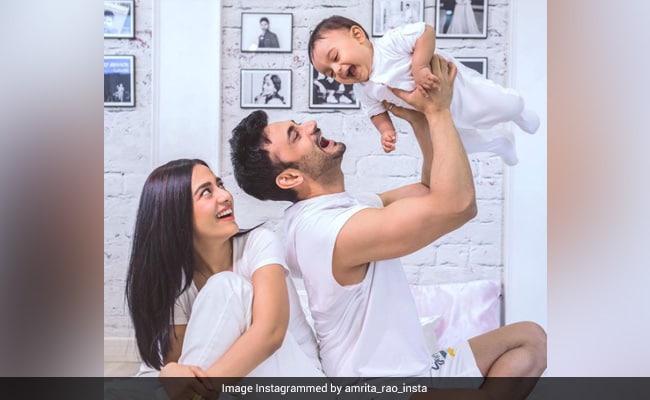 Have you seen Amrita Rao's Instagram video series, Couple of Things, with her husband, RJ Anmol? They look adorable. But did you know who is directing the actress here? It's her husband. And, RJ Anmol has acknowledged that it's a "privilege" to direct Amrita Rao for this series. He wrote in a post, "Amrita, whenever I am directing you for Couple of Things, I don't take it for granted that I am directing my wife…I take it as a responsibility of directing one of the best actors we have…I tread carefully...With conviction."

Calling it a privilege, RJ Anmol added to his lovely note, "I see it as a privilege of being in the shoes of greats like Shyam Benegal, Sooraj Barjatya, Rajkumar Santoshi, Farah Khan, Prakash Jha… who directed you in some classics." Thereafter, he announced a "dhamakedar" sixth episode for the series.

Couple of Things, the Instagram series, has brought to us many glimpses from the love life of Amrita Rao and RJ Anmol. In the fourth episode, the two disclosed their "shocking" but filmy proposal that happened on air during a late-night radio show. And, the couple recreated their priceless moment for viewers. RJ Anmol disclosed how he played Amrita Rao's favourite song Chaandi Raat and conveyed his feelings to her. In the video, we hear her exclaim, "Can you believe he proposed to me live, on the radio?"

The caption read, "RJ Anmol's shocking proposal to Amrita…Kabhi kisiko propose kiya hain [Have you proposed to anyone?] It's not easy...Takes a lot of nerves... Aur woh bhi kisi film star ko propose karna ho toh [That too, when proposing to a film star?] Anmol ney mujhe propose kiya (Anmol proposed to me)...In the most unexpected and unique style."

Recently, Amrita Rao's Vivah completed 15 years. On this occasion, RJ Anmol dropped an anecdote from their life. In an Instagram post, he shared a photo of both of them and wrote, "This day, in 2006, I saw Vivah with my family, in a theatre (Delhi)… After the film, My mother said, 'Bahu lana toh aisi lana [Find a daughter-in-law like Poonam]'."

Amrita Rao and RJ Anmol got married in 2016 and welcomed their son Veer in 2020.