For Birthday Boy Ajay Devgn, Kajol Shared The Closest Thing To A Selfie 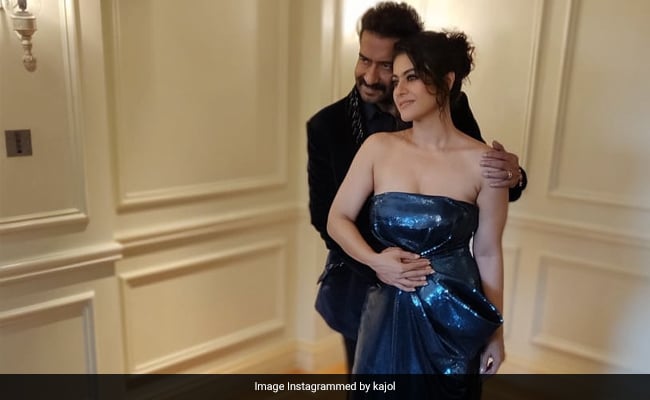 Ajay Devgn's 52nd birthday would have been incomplete without wife Kajol's wish and so she did share a super cute post for the actor. On her Instagram profile, the actress shared a picture of Ajay Devgn working behind the camera. Kajol's idea was to share a "selfie" but this is all she could get so she went ahead and shared it. Adding a humour-infused caption for the birthday boy, she wrote: "Tried getting a selfie but the only "selfie" I could manage was his "self" with another camera ... Doing what makes him happiest!" She added, "Happy Birthday... Today and always."

Kajol and Ajay Devgn met on the sets of Hulchul and later got married in the year 1999. They have worked together in several films such as Gundaraj, Ishq, Dil Kya Kare, Raju Chacha, Pyaar Toh Hona Hi Tha. The couple welcomed their daughter Nysa in 2003 and their son Yug was born in 2010. The couple were last seen together in the 2020 period drama Tanhaji: The Unsung Warrior, also starring Saif Ali Khan.

Ajay Devgn has a super busy schedule this year. He will next be seen in a cameo appearance in Rohit Shetty's Sooryavanshi. He has also produced The Big Bull, starring Abhishek Bachchan. He will also be seen in the sports drama Maidaan and Bhuj: The Pride Of India. The actor will also star in SS Rajamouli's RRR, with Ram Charan, Jr NTR and Alia Bhatt. His line-up of films also includes the Sanjay Leela Bhansali-directed Gangubai Kathiawadi, with Alia Bhatt.

Kajol was last seen in the Netflix film Tribhanga, which marked her digital debut. Produced by Ajay Devgn, Tribhanga was directed by Renuka Sahane and it also starred Tanvi Azmi and Mithila Palkar. She also starred in the short film Devi last year.