In the comments section, Priya Ahuja wrote that she absolutely loved Sonam's look for the night. 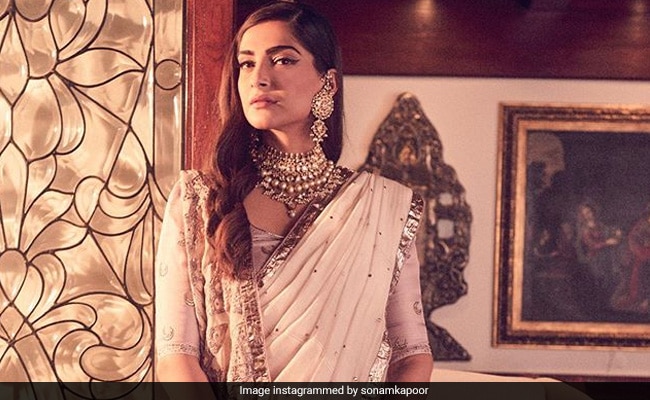 Once a fashionista, always a fashionista. The spotlight followed Sonam Kapoor at Armaan Jain and Anissa Malhotra's wedding reception last night. Sonam also sent the paparazzi into a tizzy as she walked in looking drop-dead gorgeous sporting an all-white look. The 34-year-old actress shared details of her shaadi-special saree look on her Instagram, which reveals she accessorised with priceless pieces not only from her mother's wardrobe but also from her mother-in-law's tijori. She assigned courtesy for her neckpiece to Anand Ahuja's mother Priya Ahuja while she wore earrings borrowed from mom Sunita Kapoor. In the comments section, Priya Ahuja wrote that she absolutely loved Sonam's look for the night. "Beautiful," Priya Ahuja wrote in a photo while for another, she added: "You look gorgeous, beta. Love you."

Sonam's saree was a handpicked piece from Good Earth's first couture collection. Details of Sonam's saree were shared in a post by Good Earth: "Spotted Sonam Kapoor in a Sari from our first ever couture collection -The Miniaturist, that featured shimmering gota work, a tribute to the rich art and legacy of precious embellished cloth." Needless to say that Sonam's look was put together by in-house stylist, her sister Rhea Kapoor.

Earlier last year, Sonam had shared this photo of the Eidi she received from her mother-in-law.

@priya27ahuja thank you for always buying me the most beautiful gifts... new outfit for eid! Love you mom!

Sonam Kapoor and Anand Ahuja got married in May 2018 after dating for a few years. On the work front, Sonam was last seen in The Zoya Factor.