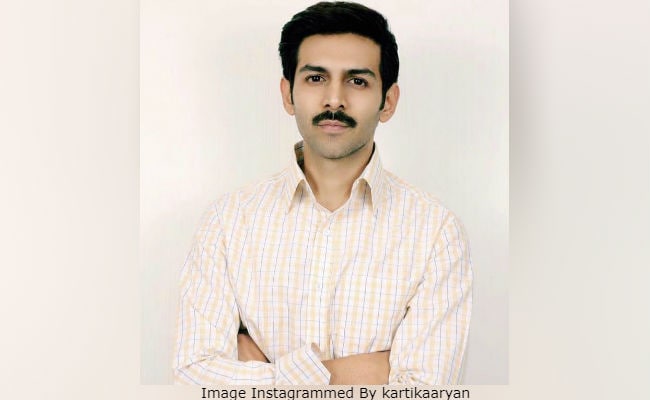 Finally, Kartik Aaryan revealed his new look, which he was hiding from the paparazzi all this while, from the upcoming film Pati Patni Aur Woh, also starring Ananya Panday and Bhumi Pednekar. The 28-year-old actor shared the look on social media this morning and wrote, "Miliye Lucknow ke Chintu Tyagi ji se - Samarpit, aashiq mizaaj pati.Pati Patni Aur Woh." In the picture, he is dressed in simple formals and sports a moustached look. Kartik's character in Pati Patni Aur Woh appears to very different from the roles he has played in his previous films like the Pyaar Ka Punchnama series and Sonu Ke Titu Ki Sweety.

The film went on floors on Monday. He shared a picture from the sets of and wrote, "First day with Patni or Woh. Clap to be removed soon." Kartik and Ananya's faces were covered with the film's clapboard.

"Kartik, Bhumi and Ananya are new age actors who are talented and add their spark to the story. We have worked with Kartik in Sonu Ke Titu Ki Sweety and we are glad that we are working again. Bhumi has proven what a fantastic actor she is while Ananya is new, but audiences will fall in love with her. The film will so have great music," T-Series' Bhushan Kumar said in a statement, news agency IANS reported. He also added that the makers have given an "interesting tweak" to the story.

Pati Patni Aur Woh will be Ananya Panday' second film. She is debuting with Student Of The Year 2.