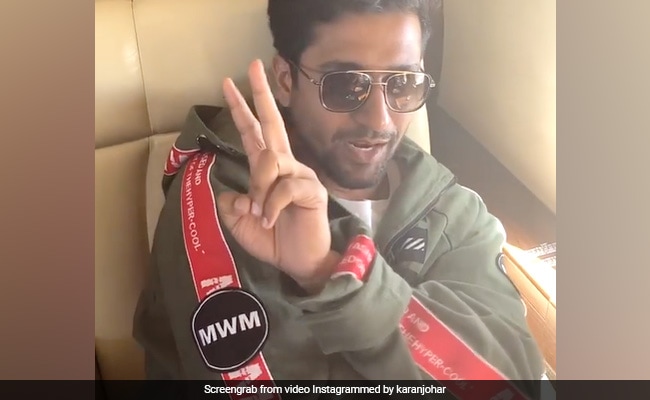 Filmfare Awards 2020: A still from the clip. (Image courtesy: karanjohar)

Have you seen Karan Johar's latest post on Instagram? It's hilarious and the credit goes to Vicky Kaushal. On Friday, Karan Johar, who flew into Assam for the 65th Filmfare Awards, shared an in-flight video featuring his Bollywood gang - Ranveer Singh, Ayushmann Khurrana, Varun Dhawan, Kartik Aaryan, Vicky Kaushal and Tahira Kashyap. He captioned it: "It's time to #toodles again." In the clip, Karan can be seen having fun with the actors. However, more than the fun banter, it's Vicky Kaushal's ROFL response that is stealing the show on the Internet. The video begins with Karan moving the camera to Tahira first and panning it to Ayushmann and asking him about his clothes. He then moves the camera towards Ranveer and gives him compliments for his outfit. After Varun Dhawan, Karan moves the camera towards Vicky Kaushal and he refers to him as a "controversial video man."

Vicky instantly replies: "I beg you Karan, please don't make a video" and stops him from continuing the recording. It appears that Karan's "controversial video man" remark is a reference to an old video from his house party. After the filmmaker shared the video last year, Vicky was accused of indulging in drug abuse. However, the actor later refuted all the accusations.

Now, take a look at the aforementioned post here:

Several celebrities such as Ranveer Singh, Madhuri Dixit and Ayushmann Khurrana will perform at the Filmfare Awards tonight. The venue for the 65th Filmfare Awards is the Sarusajai Stadium in Guwahati, Assam. The awards will air on Colors channel on Sunday evening.