"We did not used to get hassled by technology then. Now we look for a detox," said Fatima Sana Shaikh 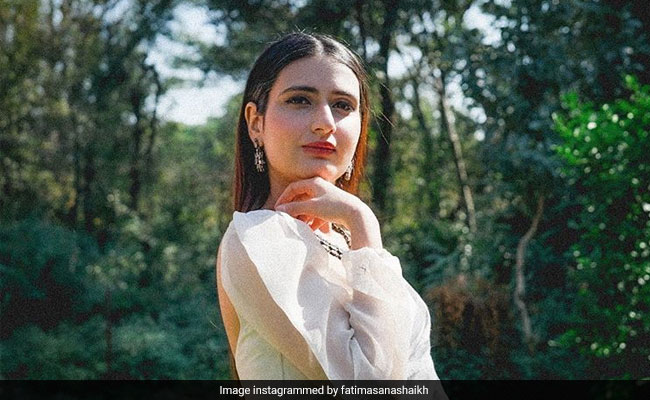 There is a certain romance and sweetness to the 1990s that was free from the hassles of social media overdrive, believes Suraj Pe Mangal Bhari" actor Fatima Sana Shaikh for whom playing hide-and-seek with her friends is the most memorable part of the bygone era.

Shaikh, who stars in the '90s-set comedy Suraj Pe Mangal Bhari, said the information explosion of the digital age is in stark contrast to the slower, less corrupt decade which saw the arrival of Internet.

"There was technological development at that time but it was not corrupted. There was no social media bullying. Technology was very new, so everything appeared sweet and romantic."

"There were telephones, there was no instant messaging like today. We did not used to get hassled by technology then. Now we look for a detox," the 28-year-old actor told PTI in an interview.

"I have very fond memories of playing hide-and-seek and a game of Kho-Kho with my friends. Children find a playground anywhere - it could be a street or a construction site," she added.

Suraj Pe Mangal Bhari is billed as an unlikely comedy about a wedding detective on a hunt which turns into a chase game and the actor said she boarded the project because of the script.

Directed by Abhishek Sharma of Tere Bin Laden and Parmanu: The Story of Pokhran, the film also stars Manoj Bajpayee and Diljit Dosanjh.

"It is a funny film and has such good actors like Manoj sir and Diljit. Abhishek Sharma is a good director with promise that makes you feel the film will be good."

Shaikh plays Tulsi, who according to her brother, wedding detective Mangal (Bajpayee) is the perfect Indian woman. But he is unaware of that she has a different side to her personality which comes out after she meets Suraj (Dosanjh).

The actor said the definition of what it means to be an Indian woman has undergone many changes over the years and women today are becoming more independent of the stereotypes thrust upon them.

"We have always had progressive Bharatiya naris in the audience. In every generation, there are women who were a little different and were labelled as outcasts. But now there is more acceptance, it''s sort of okay. Today, more and more women are independent and progressive," she said.

"I think I fall into that outcast category," she quipped.

Shaikh will also be seen in Anurag Basu''s absurdist comedy Ludo, which released on Netflix Thursday.

Talking about her character, the actor said, "Pinky will ask for help, say thank you, then she will fight, then again come back for help to say thank you but will get what she wants."

Shaikh said Basu doesn''t give the whole script to the actors as he doesn''t want them to come on set "over prepared".

"We would get to know what the scenes for the day are in the morning, so it wasn''t like that we were totally clueless. When he would sit with us, he would discuss, explain, if you don''t get it, he will tell you again.

"I told him that I have tough time learning lines and would say, ''Please give me the script beforehand and we''ll do whatever you want when I come to the set''. So he would give the script to me."

They worked together to understand each other''s styles, she further said.

"He does that because he wants some ''magic'' in the scene. When you see the film, you see that no reaction feels fake, it's very spontaneous."

With Suraj Pe Mangal Bhari heading for a theatrical release amid the coronavirus pandemic on November 15, Shaikh said she is glad that people will get to see her work after two years, regardless of the medium.

Her last release Thugs of Hindostan, which was touted as one of the biggest event films of 2018, was met with extreme criticism and crashed upon its release.

"It has been a long time since any of my films came out. What''s important is that people get to see my work. When I got to know ''Suraj...'' is releasing in theatres, I was very excited. I know pandemic is still here, but people now really want to come out of their homes.

"We have to turn a new page. Cinema is basically an escape. You see films at home but that is another thing, there are a lot of things running in your mind. But in a cinema hall, your whole attention is on the screen," she said.