Fatima Sana Shaikh Had A Strong Posing Game Even As A Kid. Here's Proof

Fatima Sana Shaikh looks cute as a button in this throwback 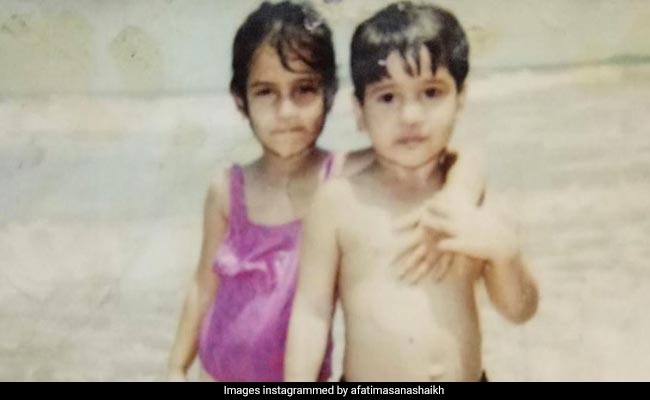 We simply love it when Bollywood stars post throwback pictures and the reason we brought this up today is because Fatima Sana Shaikh shared an oh-so-adorable picture of herself along with her brother from her childhood days. In the photograph, little Fatima can be seen dressed in a pink swimsuit and she looks cute as a button. Fatima captioned her post: " Samundar main naha ke aur bhi namkin ho gaye ho. Mera bhai aur main." She accompanied the post with the hashtag #siblinglove. Fatima's expression in the picture is priceless. Without much ado, take a look at Fatima Sana Shaikh's post here:

Fatima Sana Shaikh, who began her career in Bollywood as a child artiste, frequently delights her fans with throwback pictures. Remember the throwback picture, featuring Tabu? The one that she shared from the sets of the film Chachi 420. ICYMI, check out the post here:

Fatima Sana Shaikh became a household name after she featured in Nitesh Tiwari's 2016 super hit film Dangal, alongside Aamir Khan and Sanya Malhotra. Before her breakthrough movie Dangal, the 27-year-old actress starred in television shows like Ladies Special and Agle Janam Mohe Bitiya Hi Kijo. She has also been a part of films such as Bittoo Boss and Akaash Vani.