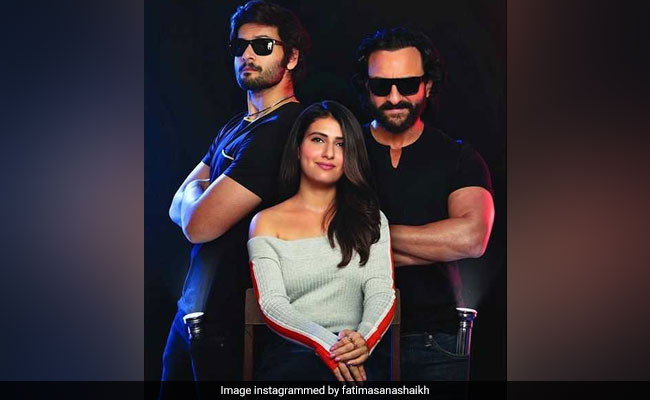 Saif Ali Khan, Fatima Sana Shaikh and Ali Fazal are all set to hunt ghosts together in their forthcoming film Bhoot Police. On Thursday morning, the makers unveiled the cast of the film and we couldn't be more excited. Bhoot Police will be a horror-comedy directed by Pavan Kirpalani. Film's lead actress Fatima Sana Shaikh shared a picture of herself along with her co-stars on her Instagram profile and she captioned it: "Ghost hunting is a hilariously spooky business! Presenting the cast of Bhoot Police." In the picture, Saif and Ali Fazal can be seen standing dressed in black t-shirts, while Fatima can be seen sitting pretty in a grey boat-neck top.

Ali Fazal also shared the same picture on his Instagram profile and wrote: "The team that hunts ghosts together, sticks together. Meet the cast of India's spookiest comedy." Check out the post here:

Bhoot Police marks the first collaboration of Saif Ali Khan and Dangal actress Fatima Sana Shaikh. The film is expected to go on floors in August, 2019 and it will be produced by Fox Star Studios.

Other than Bhoot Police, Saif Ali Khan has web-series Sacred Games 2 and films like Taanaji: The Unsung Warrior, Hunter and Jaawaani Jaaneman in the pipeline.

Fatima Sana Shaikh's next project is an untitled film with Anurag Basu. She was last seen in Thugs Of Hindostan, co-starring Amitabh Bachchan and Aamir Khan.