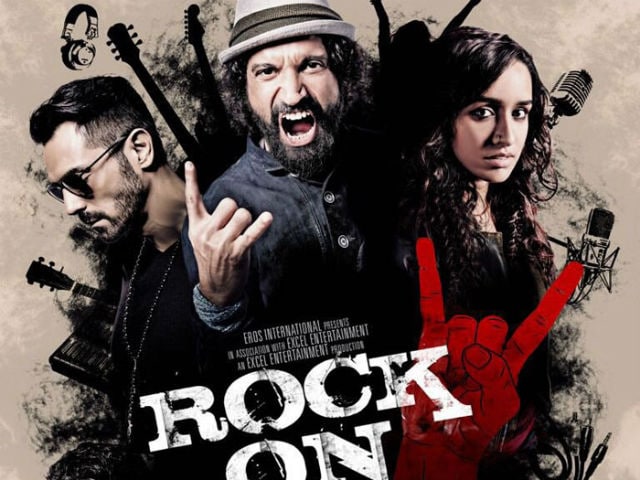 The teaser poster of Rock On 2

New Delhi: Rock On!!gave us one of the coolest rock bands on Indian celluloid with Adi, Joe, KD and Rob enchanting audiences with their unbreakable friendship, dare-to-dream attitude and unforgettable melodies.

This time around, the original cast of Farhan Akhtar, Arjun Rampal, Purab Kohli and Prachi Desai (who played Adi's wife in the original film) are being joined by two new band-members - Shraddha Kapoor, and Shashank Arora (who debuted with YRF's Titli).

The team of the new film, whose teaser poster was revealed yesterday and quickly became a point of discussion on social media, has been introduced in innovative posters, with their characters embedded within the signature hook-'em horns that signify the sequel.

Each actor shared their own poster on Twitter with a catchphrase of their character.

'Adi' is on vocals and rhythm guitar:

Shraddha's Jiah will be on vocals and keyboard:

Purab will reprise his role of 'Killer Drummer:'

8 yrs on #Music is still the only thing that matters to him. Music Nahi Toh Kuch Nahi - KD #ReliveTheMagik#RockOn2pic.twitter.com/qADqUgcMjq

Promoted
Listen to the latest songs, only on JioSaavn.com
Director Shujaat Saudagar shared Arjun 'strumming his way back' with lead guitar:

Strumming his way back to create Magik! Joe! #RockOn2#ReliveTheMagikpic.twitter.com/NAki1q2CA2

Rock On 2, which was primarily shot in Shillong, will have tracks featuring the voices of Farhan Akhtar and Shraddha Kapoor. Just like the last time, we're really hoping for a concert where the film's band can recreate the 'magik.'