Farhan Akhtar's Birthday Wish For Arjun Rampal Comes With A Rock On!! Reference 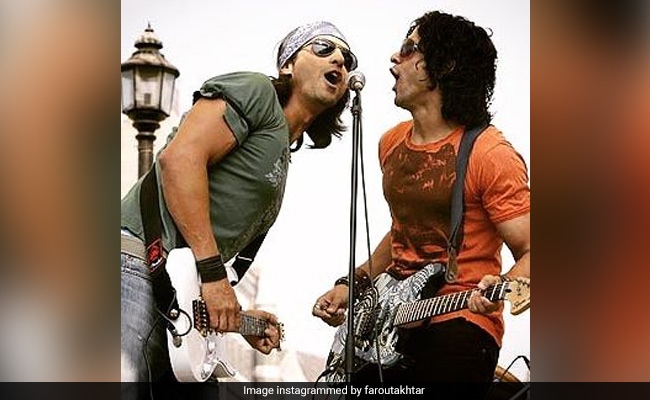 Arjun Rampal and Farhan Akhtar in a still from Rock On!!. (Image courtesy: faroutakhtar )

Arjun Rampal's closest friends, colleagues and fans posted wishes on the social media, expressing their love and shared some of the cutest messages for the actor on his 47th birthday. One such adorable wish came from Farhan Akhtar, who co-starred with Arjun in the 2008 film Rock On!!. Farhan posted a still from the song Socha Hai from the film. In his post, Farhan referred to Arjun as Joe (which was his character's name in the film). "Happy Birthday, brother Joe. Big hug," wrote Farhan Akhtar. Arjun Rampal was quick to respond to Farhan's birthday greeting. He wrote: "Thank you, brother Adi. Love you." (Adi was the name of Farhan's character in Rock On!! ).

Meanwhile, Arjun Rampal's girlfriend Gabriella Demetriades posted a special wish for the actor on her Instagram profile, on Tuesday. She posted a bunch of super cute pictures and wrote: "With you time is not linear but still we should celebrate the day you graced us all with that smile and every day that you share those pearls of wisdom with the world. Happy Birthday to you, shri-ji Arjun Rampal."

With you time is not linear , but still we should celebrate the day you graced us all with that smile and everyday that you share those pearls of wisdom with the world . Happy birthday to you shriji @rampal72

In terms of work, Arjun Rampal was last seen in JP Dutta's 2018 film Paltan. He will next be seen in Shailesh Varma's Nastik. Arjun Rampal is best-known for his performances in films such as Ra.One, Om Shanti Om, Heroine, Dil Hai Tumhaara, Inkaar and many others.