Farhan Akhtar And Shibani Dandekar To Get Married This Year: Report 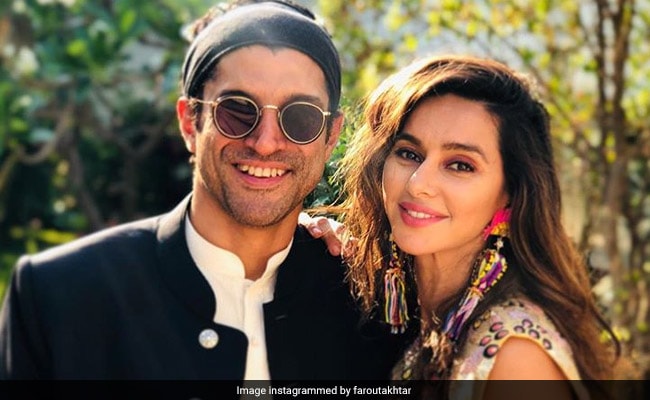 Farhan Akhtar and his girlfriend Shibani Dandekar recently found a spot on the trends' list after reports about their rumoured wedding started doing the rounds on the Internet. A report on Mumbai Mirror states that the couple are "planning to get married towards the year-end" and their wedding ceremony will most probably be held after the release of Farhan's Toofan. The Mumbai Mirror report also states that Farhan and Shibani have already started prepping for their wedding. A source close to the couple told the publication: "The plan is to get married towards the year-end, after the release of Farhan's next, Toofan. But they might spring a surprise by tying the knot earlier than that. The final date is yet to be decided but Farhan and Shibani have begun preparations for the big day."

Farhan Akhtar was previously married to celebrity hairstylist Adhuna Bhabani, with whom he has two daughters-Shakya and Akira. The duo officially ended their 16-year-long marriage in April 2017. The actor started dating Shibani in 2018 and confirmed their relationship on Instagram by sharing a picture of himself and her, in which both of them could be seen walking hand-in-hand. Here's the post we are talking about:

Since then, Farhan and Shibani have made appearances on several occasions together. The duo often express their love for each other through adorable posts on their social media accounts. We have selected a few for you. Check them out:

Happy birthday my better half .. thank you for all the magic, laughter and love you have brought to my life .. you are one of the most beautiful souls I have ever met and the world really needs more like you! I've never met anyone as kind, as attentive, as selfless, as brave and as focused as you.. Just being around you has taught me so much ( mainly patience!!) You inspire me! thank you for including me in every part of your life, for making me feel so special and for always making time for 'us' !! Having said that you do need to 'unclench' a little.. be more 'free flowing' To many more sessions in the ring, savouring protein bars together,late night walks with Jim Jam, Jlo movies, finishing my word crossy and foot rubs!! Love you my Foo always Can't wait for the next round @faroutakhtar photo by @errikosandreouphoto style by @pashamalwani HMU @mallikajolly @azima_toppo shibani's outfit - @dior Farhan's shirt @hemantandnandita Trousers @bodicebodice

Last year, the couple trended big time on social media after one of Farhan Akhtar's Instagram posts instigated reports of his and Shibani's rumoured engagement. In the picture, the duo could be seen holding hands and their rings sparked the engagement rumours. The rumours were then followed by reports of their wedding. Here's the ring photo we were talking about:

There's something so real about holding hands, a kind of complex simplicity, saying so much by doing so little. unknown - @shibanidandekar

On the work front, Farhan Akhtar will next be seen in Toofan, which is slated to release on October 2.