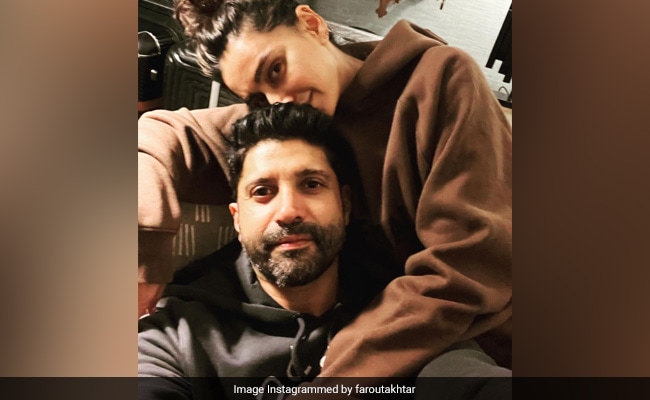 Shibani Dandekar is ready to welcome 2022 in all its glory while looking like a diva. The actress-model shared a video of herself walking on the streets of towns and cities across the world. In the montage video, she added the song The Good Part by AJR. And playing on the lyrics of the song, Shibani Dandekar wrote in the caption, “Why skip when you can just walk towards the good part?” And, if you have any doubts as to who followed Shibani Dandekar as she strutted around the globe, we are happy to inform you that it is none other than her boyfriend, Farhan Akhtar.

The actor-director confirmed this with a rather cheeky comment that said, “So well shot. Wow!” with clap emojis. In her witty comeback, Shibani Dandekar said, “Farhan Akhtar, thanks. Wasn't the easiest guy to work with. But we got there in the end,” with laughter and heart emojis.

Shibani Dandekar also posted a montage video as she bid goodbye to 2021. In the clip, the actress shared her fashionable looks and also sneaked in a video or two of her mushy moments with Farhan Akhtar. In the caption, she wrote, “Ready for you, 2022.”

On the occasion of Christmas last year, Shibani Dandekar shared a photo of herself in an oversized bright red coat surrounded by trees and Christmas decor. “Merry everything and happy always,” she wrote in the caption.

Replying to the image, Shabana Azmi, who is married to Farhan Akhtar's father Javed Akhtar joked “The coat is too small for you... Shouldn't you have got a bigger size?” Meanwhile, Farhan Akhtar replied with two heart emojis.

Shibani Dandekar has appeared in movies such as Roy, Shaandaar, and Noor, among others. Farhan Akhtar was last seen in the lead role in Toofan. He will return as a director with Jee Le Zaraa starring Alia Bhatt, Katrina Kaif and Priyanka Chopra.